Which Strains Are Highest in THCV? 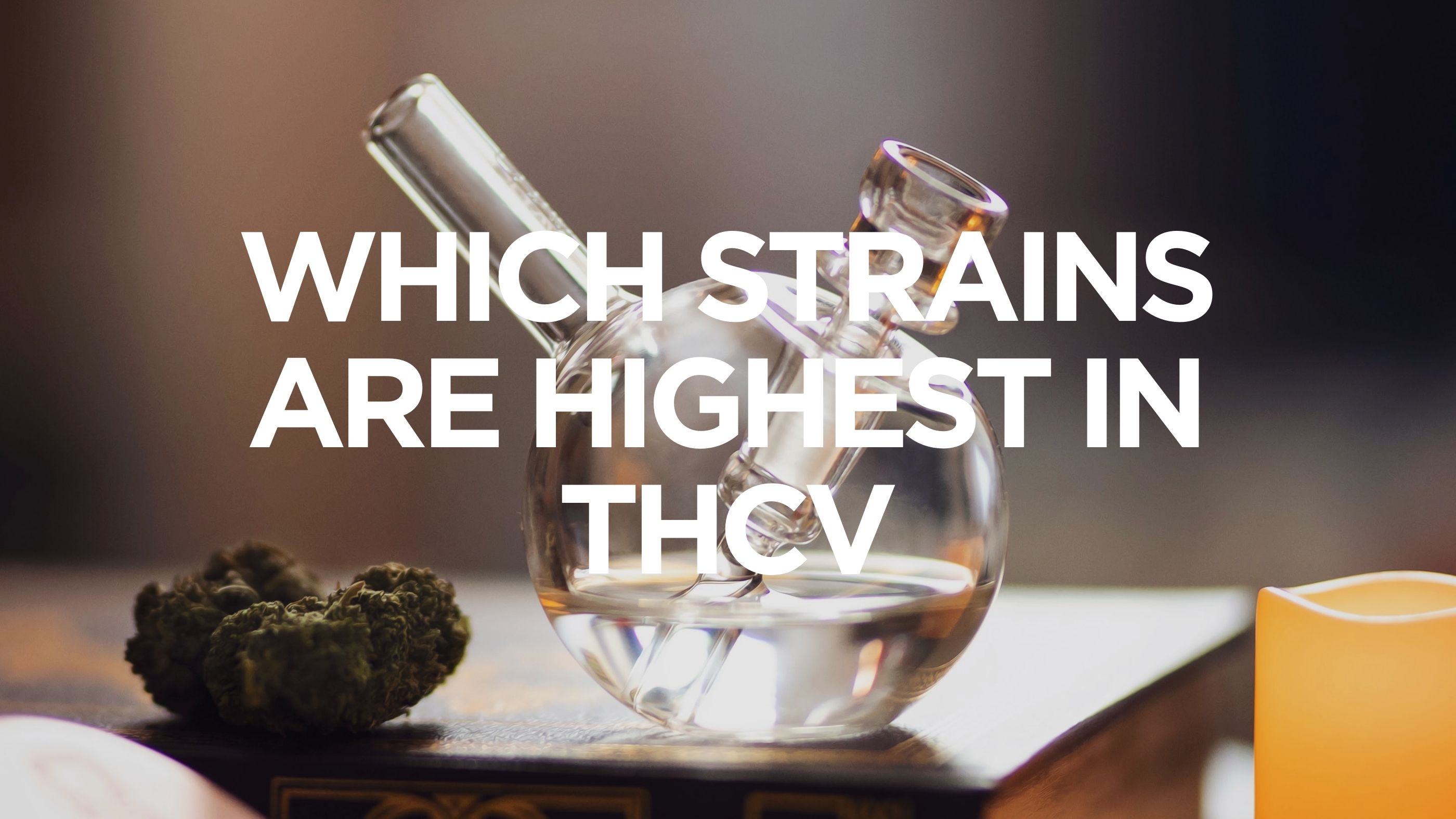 As our scientific understanding of cannabis expands, we're learning more about how the plant's complex chemical makeup influences how our bodies and minds react to various strains. We're learning that even the smallest components, including cannabinoids, terpenes, and flavonoids, can have a major impact on how a cannabis strain makes us feel and the health benefits it can offer. The non-psychoactive cannabinoid tetrahydrocannabivarin (THCV) is a wonderful example of this.

In most cannabis strains or cultivars, THCV is a minor cannabinoid found in modest levels. THCV refers to a unique cannabinoid compound that is prevalent in Sativa strains of cannabis. Nowadays, this cannabinoid has gained so much popularity due to its wide array of health benefits and special properties. For one, it is known to induce a feeling of euphoria that is more stimulated, alert, and energizing. As a result, it is frequently advised for use during the day or whenever functionality is deemed essential. If you’re a medical marijuana patient who is continually seeking relief from a particular health condition, then you’re in for a treat!

In this article, we’ll be featuring 10 cannabis strains with the highest THCV content — but before we get to that, allow us to shed some relevant information regarding THCV, why it’s famous among all CBD compounds, and the health advantages it provides.

THCV is another cannabinoid found in marijuana, and it is only present in some strains of the cannabis plant. Chemists would often tell you that the main distinction between THCV and THC is that THCV has a 3-carbon molecular group rather than a 5-carbon group.

THC (tetrahydrocannabivarin) is a homologue of THCV. THC has a pentyl group on the molecule, whereas THCV holds a propyl group — this structural variation brings about differences in terms of the underlying effects these two substances produce.

Does THCV Make You High?

Is THCV a Water-Soluble Compound?

THCV does not dissolve in water and is only soluble in oil-based solutions. However, science has a remedy in the form of nanoemulsions. THCV may be broken down into nano particles that dissolve in water using modern mechanical methods.

What is THCV's Boiling Point?

The boiling point of THCV is 428 degrees Fahrenheit, which is 114 degrees higher than that of THC. As a consequence, you can heat edibles at a higher pressure, but this method has a loophole: at over 245 degrees Fahrenheit, a range of cannabinoids and terpenes begin to vaporize. This means you'll be missing out on flavor and effects.

How Do I Extract THCV?

While the extraction of THCV is substantially more expensive due to lower amounts of the compound in plant biomass, the technique is largely the same. THCV, like other cannabinoids, is extracted using a chromatography method that separates the components from the plant using superfluid liquid solvents like CO2 or ethanol. The solution is then evaporated under vacuum with heat to eliminate all of the gas, leaving a high-purity THCV concentrate behind. To maintain potency, THCV products should be stored at room temperature and out of direct sunlight once extracted.

Can THCV Be Detected in Drug Tests?

Yes. In one study, it has been found that THCV-COOH could be discovered in the urine for up to two weeks after four non-chronic marijuana users who smoked one marijuana cigarette tested positive in drug use. This directly means that THCV is visible and can be detected in drug tests.

What Are the Health Benefits of THCV?

THCV has sparked a lot of interest in recent years, and as more scientific studies are conducted, the potential benefits of this cannabinoid are becoming clearer. Here are some of the advantages that THCV offers to the human mind and body. Be amazed by the wonders of this CBD compound as you read on below.

For generations, many individuals have used the cannabis plant to promote sound mental health. While many people use THC to help cope up with anxiety, it can also have a reverse effect and actually cause paranoia in certain people.

Fortunately, THCV appears to have similar mental health advantages, but without the danger of paranoia or other unpleasant psychoactive side effects.

Here are a few ways THCV can help you improve your mental health:

The use of THCV may help with post-traumatic stress disorder, obsessive-compulsive disorder, and other anxiety disorders. New research backs up the cannabinoid's capacity to decrease or even prevent panic attacks without dampening emotions.

Sleep issues can have a significant influence on someone's quality of life on a daily basis. THCV, like THC, can aid with good sleep maintenance, which is good news for people who suffer from insomnia and sleep disorders.

According to research, THCV has been found to help lessen symptoms of certain psychiatric diseases, such as schizophrenia. Its antipsychotic properties may aid in the regulation of hyper locomotor activity, social behavior, and cognitive function.

The advantages of THCV are not only limited to mental health; it also has numerous physical health benefits.

Here are a few ways that THCV can boost your physical health:

Whilst THC is known for stimulating hunger, (also known as "the munchies"), THCV does the exact opposite by suppressing your appetite. By reducing hunger, promoting fullness, and up-regulating energy metabolism, cannabis can aid in weight loss and obesity management.

THCV can help people manage their blood sugar and insulin levels in the same way as intermittent fasting can. For patients with type 2 diabetes, this is encouraging news.

In human and animal models of diabetes, THCV and CBD have been proven to enhance metabolism and blood glucose levels.

According to a study in 2016, THCV and CBD reduced blood glucose levels and enhanced insulin production in persons with type 2 diabetes, thus indicating a “new therapeutic agent for glycemic control.”

THCV has the ability to attach to your body's bone marrow receptors. This indicates that it may promote bone marrow growth and tissue turnover, hence slowing down and preventing bone deterioration.

Cancer patients who enrolled in Minnesota's medical cannabis program had reported significant improvements in some of the many symptoms, such as anxiety, metabolic problems, depression, disturbed sleep, fatigue, nausea, pain, and vomiting, within four months of starting the program — this was according to the researchers from the Minnesota Department of Health (MDH) and the Oncology Research Center at HealthPartners/Park Nicollet.

Nearly half of the patients who had been vomiting at the time of their cannabis certification said the severity of their nausea had decreased by more than 30% in the four months following their first cannabis purchase.

While much of the study on THCV's neuroprotective properties has been done on mice so far, the results are nonetheless promising. People with epilepsy and Alzheimer's disease will benefit the most from this neuroprotection. The cannabinoid may aid in the reduction of seizures, tremors, and brain lesions, as well as the support of muscular control.

Chronic inflammation in the human body can result in a variety of discomfort and dysregulation. THCV has been proven to reduce oxidative stress while also acting as an anti-inflammatory agent. This is especially promising for those who have had accidents or other chronic inflammation-related diseases such as diabetes or Crohn's disease.

Which Strains Are Highest in THCV?

With all of the advantages this cannabinoid provides, you're probably asking why there aren't more high-THCV cannabis strains and products available. Because THCV is so unique, it's not only challenging to discover, but also difficult and expensive to isolate and extract.

Nevertheless, there are a few cannabis cultivars that are inherently rich in THCV, and practically all of them come from African landrace sativas. They may be more difficult to locate, but the extra work is well worth it.

If the numerous advantages of tetrahydrocannabivarin pique your interest, here are 10 high-THCV strains you should know about.

In terms of THCV, Dougs Varin is the most popular marijuana strain. It is currently grown for its high levels of THCV. It has an earthy pine scent with zesty undertones. It produces a brief burst of clear-headed mental stimulation. It can also help you lose weight by suppressing your appetite.

Purple Pineapple is a sativa-leaning hybrid strain that is also known as Pineapple Purps. It's a sweet-smelling marijuana strain with high levels of THCV and moderate levels of THC. Though some sites believe it is descended from Pineapple Express or a Cheese strain, the true lineage is undetermined.

Malawi is a sativa landrace strain that originated from the African continent. It gives off an energizing rush that is both mentally and physically stimulating. It's high in THCV and can help you lose weight by curbing your appetite and accelerating your metabolism.

This is a unique landrace sativa strain with roots in the East African Nguni tribe. It's a resistant strain that thrives in a variety of weather situations. It has a pleasant, lemony flavor, and its effects are immediate. It's a superb strain for unwinding and relaxing after a long and exhausting day.

Power Plant is a potent sativa strain developed by Dutch Passion Seed Company. It contains a high amount of THC, ranging from 15% to 20%, as well as a high THCV content. It has received multiple cannabis prizes since its inception in the 1990s.

Willie Nelson is a cannabis strain named after the well-known country performer "Willie James." This strain won the Cannabis Cup for best sativa strain in 2005. It has a sweet and sour flavor profile with a lemongrass aftertaste. It's a cross between Nepalese and a South Asian sativa strain. When consumed in large doses, it produces a clear-headed high. Because of its high THCV content, it's an excellent choice for controlling hunger.

The origins of this strain have sparked some debate. While some claim it is a Sativa strain from Africa, some insist it originated in Mexico. The Red Congolese is a vibrant marijuana strain that provides modest stimulation and mental clarity. It's a fine strain for treating stress, anxiety, and obesity.

Jack the Ripper is a well-known marijuana strain that has received numerous honors and Cannabis Cups. As a sativa dominating strain, it provides immediate cerebral elevation and mental stimulation. The scent is sweet with spiciness in it.

When consumed in large doses, this balanced hybrid strain induces euphoric relaxation. It's high in THCV and has a long list of therapeutic benefits, including hunger suppression, pain relief, anxiety reduction, and Alzheimer's symptom relief. It's the offspring of Black Garlic and Boost Goddess.

Skunk #1 is another award-winning Skunk family strain. It was developed as a cross between Afghani landrace, Colombian Gold, and Acapulco Gold by Sacred Seed Co. It smells like skunky marijuana and gives you a high-energy rush. Most importantly, it contains a desirable amount of THCV.

In contrast to THC, THCV has clinical and therapeutic benefits in pharmacotherapy due to its lack of psychoactive effects in human trials. However,  the dual pharmacological actions of THCV on CB1/CB2 receptors, which exhibit agonistic and antagonistic effects depending on dosage, suggest that more research is needed. The unique and diversified properties of THCV are expected to be investigated further for development into clinically-relevant medicines for the treatment of life-threatening disorders.

Moreover, it is widely-important to remember that THCV would yield its numerous therapeutic benefits when taken in tiny doses, and most especially if it’s set for medical use, not just for mere recreational purposes.