What Is Kava? Origins, Usage, & Benefits 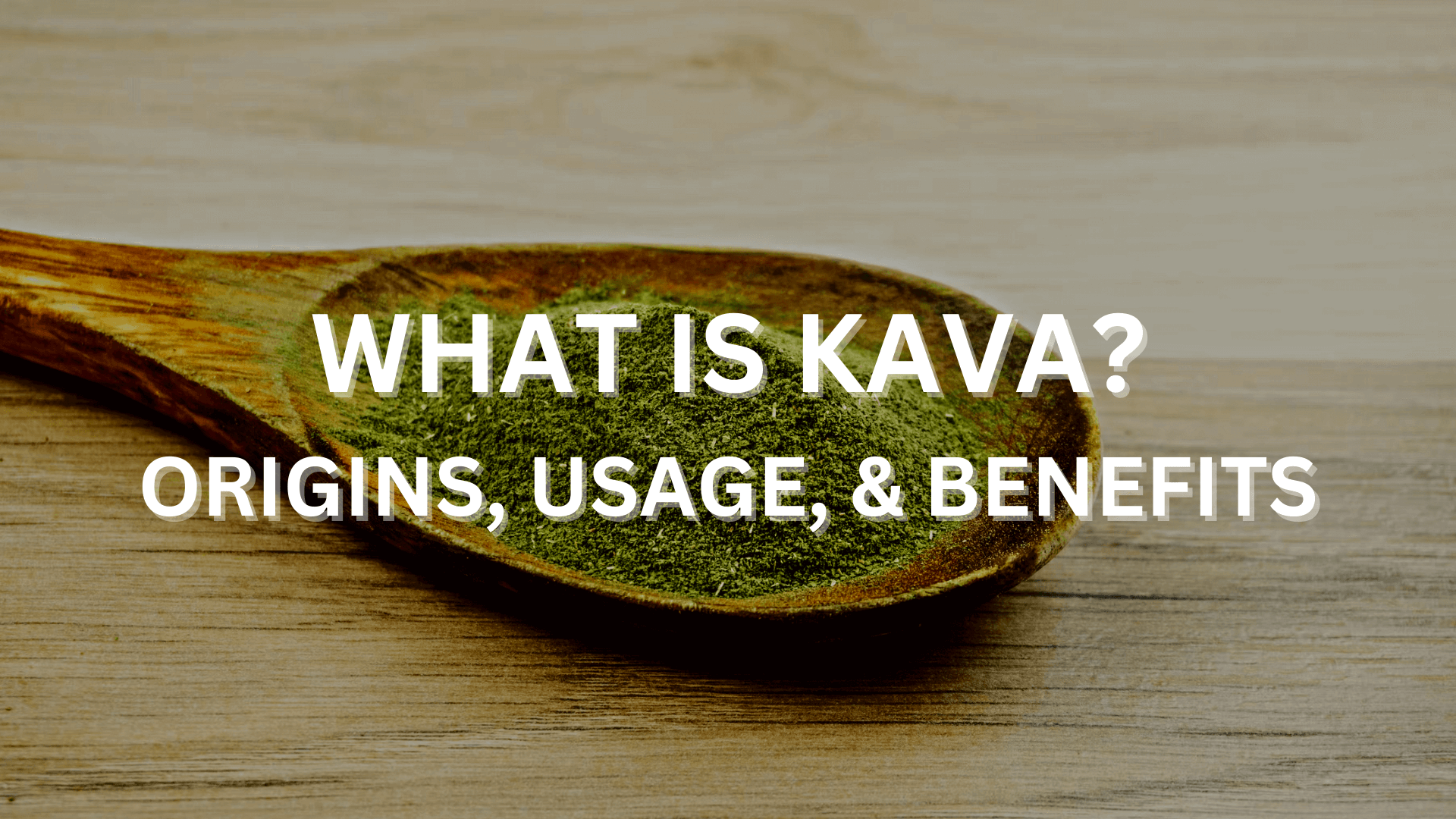 What is Kava? Some people take the herbal remedy Kava to promote sleep and reduce tension and anxiety. Some people relate this plant extract's relaxing, euphoric effects to those of alcohol. Kava Kava, also known as just Kava, has a long tradition of use in ceremonial rituals and complementary medicine. It has started to appear in several clinical research papers lately.

Kava extract is typically consumed as a tea or mixed with water, although it can also be purchased as a pill. The National Institutes of Health (NIH) reports that while Kava provides a slight calming effect, it also has the potential to seriously harm the liver.

Although the Food and Drug Administration (FDA) of the United States advises against its use, it is nonetheless legal to sell Kava there. Many academics continue to support its use and work to develop safer methods of Kava consumption. Here, you will get to know Kava's usage, advantages, and safety.

Kava is derived from the Piper methysticum plant, which is native to the Pacific Ocean islands. Traditionally, the plant's root was ground into a paste and combined with water or coconut milk to make a drink.

People from the South Pacific islands use Kava as a drink to induce a state of altered awareness during cultural and religious activities. The dried roots can also be ground into powder or tablets.

Kava offers a calming, euphoric impact when consumed. Anxiolytic medicines are those that have this soothing effect, according to scientists. Another anxiolytic medication is alcohol, which has comparable effects to Kava. Because of these effects, many people use it as a recreational drug and medicine, as it can help alleviate tension and anxiety.

People use Kava to help alleviate anxiety and encourage sleep. We'll look into what the research shows below.

Kava is mostly used to relieve stress and worry. According to research, Kava might be able to help cure the symptoms associated with anxiety disorders.

In a 2013 randomized controlled trial, 75 people with anxiety disorders were given either Kava extracts or a fake drug. At the end of the study, they discovered that Kava reduced anxiety symptoms in a small but significant way. So apart from headaches, the respondents didn't experience any other side effects or problems with their livers. The authors say that Kava could be useful for treating anxiety disorders in the short term.

A 2011 review study says that Kava might help with stress and anxiety. But the authors claim that just like other herbal medicines or dietary supplements, there needs to be more research on how safe and effective it is before it can be recommended as a therapy. NIH says that research about how well Kava works gives mixed results.

Because it calms anxiety, Kava supplements could help you fall asleep. Because of this, people also use it as a different way to treat sleep problems.

How Does Kava Affect the Brain and Body?

The chemicals that make Kava work are called Kavapyrones. We still don't know everything about how they work. But they appear to change how nerves tell the body what to do.

For instance, we know that Kava impacts nerve receptors for GABA (gamma-aminobutyric acid). On these receptors, alcohol and some medicines for anxiety and pain also work. When some people use Kava, it makes them feel calm or takes away their pain.

Some of the effects of Kava are similar to those of alcohol, but others are not. In one study, Kava didn't slow down thinking or response time as much as alcohol did. But when people mixed Kava with alcohol, they got drunker than when they just drank alcohol.

In one review of studies on Kava, people's reaction times were slightly slower when they drank Kava on their own. But once again, when they mixed Kava with alcohol, they got even drunker.

Kava seems to have calming effects like alcohol, but it doesn't cloud your mind as much. Because Kava affects muscles, you may have comparable physical effects, like slow response times, difficulty speaking, and an unsteady walk.

Even though Kava acts on a number of the same receptors as alcohol, it doesn't seem as addictive as alcohol. But there needs to be more research on the risks of getting drunk or hooked on Kava.

Related Article: Kratom Vs. Kava: Which Is Better?

Most individuals are likely to take small amounts of Kava without getting sick. But it could be more dangerous for some. Avoid using Kava if you:

Does Kava Hurt the Liver in Any Way?

Some countries have limited or even banned Kava because it could hurt the liver. New studies show that this risk is small but real. Liver damage from Kava could be mild or severe. If you stop taking Kava, it usually goes away.

In 2002, the FDA warned people not to use Kava because it had been linked to liver damage in some cases. Since then, studies have shown that the chance of liver damage is greater when:

The FDA does not endorse supplements. It is up to the manufacturers to make certain that their products are safe. The FDA will take a product off the market if it is unsafe or if the assertions about how well it works are not true.

Even though the FDA warned in 2002 that Kava could hurt the liver, it did not ban it or take it off the market. Since then, more and more studies have been done to learn more about Kava's effects and safety.

You can take Kava as a tea, a capsule, a powder, or a liquid. Except for Kava tea, these products are made from a concentrated mixture that is made by using ethanol or acetone to extract Kavalactones from the root of the plant (3).

The most common way to take Kava for anxiety is in tea, which is easy to find. It is sold alone or with other herbs that are said to help people relax. Hot water is used to brew it. Ensure the Kavalactone content and other ingredients are listed on the Kava tea you buy. Don't buy teas whose ingredients are listed as "proprietary blends." You won't know how much Kava you get when you buy these items.

This liquid version of Kava comes in small bottles of 2–6 ounces (59–177 ml). It tastes like whiskey, but you can consume it with a dropper or make a Kava drink by mixing it with juice or another beverage to mask the taste. It's important to only take a small amount because the Kavalactones are concentrated, which makes Kava tincture and Kava liquid stronger than other forms.

If you dislike Kava's taste, you can take it as a capsule. Like Kava tea, seek out products that say how much Kavalactone they have. For example, one capsule might have 100 mg of standardized Kava root extract with 30% Kavalactones. This way, you can avoid taking too much or too little Kavalactones.

To ensure the best Kava experience, make sure that you use only high-quality products that come in different varieties and are tested for safety. You can't go wrong with selections such as Apotheca Kava , Apotheca Remarkable Herbs Kava 1oz , and Apotheca OPK Kava Extract Capsules .

If You Take Too Much Kava, What Will Happen?

The effects of medicines, foods, and kava-containing dietary supplements differ for each person. The correct amount for one individual might not be the right amount for another. But most experts agree that most people can take up to 400 mg of Kava daily without getting sick.

If you take too much Kava at one time, you may:

People who use a lot of Kava for a long time may experience the following:

It is rare for Kava to cause serious side effects on its own. But taking Kava with alcohol, sedatives, or other medicines that make you sleepy or hurt the liver can be dangerous. Some of the possible side effects include damage to the liver and coma.

Call a doctor immediately if you consume a lot of Kava for a long time and start to feel bad. This is particularly important if you have pain or swelling in your stomach or if the color of your skin changes. These could be indications of damage to the liver.

Does Kava give you a high?

Kava can give you a sense of well-being, reduce or get rid of your anxiety, make you more reflective, make you more aware of your surroundings, heighten your senses in general, or even make you want to sleep. Still, it won't get you "high" unless you abuse it in a very extreme way. And even then, the most likely thing to happen is sleep.

What does Kava do to the body?

Most people know Kava for its ability to calm them down. Kava is said to improve mood, well-being, and happiness and to make people feel relaxed. Several studies have shown that Kava might help with anxiety, insomnia, and other nervous disorders.

Is Kava worse than alcohol?

Kava is not physically addicting like alcohol. By pharmacological standards, Kava is not a drug because it doesn't cause dependence or addiction. This means that even people who use Kava for a long time and then stop don't seem to go through any withdrawal symptoms when they stop. Also, it doesn't seem like you can build up a tolerance to Kava. In fact, Kava has something called "reverse tolerance," which means that new users need to take much more of the plant to feel its effects than people who drink it often.

Is Kava a drug?

Kava is a drug that slows down the messages between the brain and the rest of the body. The root or stump of the Kava (Piper methysticum) shrub is used to make Kava.

In small amounts, Kava can relax muscles, make you feel sleepy, and make you feel good. Long-term use of Kava, on the other hand, can cause several health problems, such as malnutrition, weight loss, and lack of interest in life.

Buy Only the Best Kava Products At Apotheca

If you're in the North Carolina, Tennessee, and Georgia areas, Apotheca can give you the Kratom products you need. Our mission is to provide you with clean, affordable, and sustainable alternative remedies to modern medicine.

Our team researches, curates, and tests partner brands that put people first before profit. No product reaches our store shelves without being tested thoroughly for quality and efficacy.

Our partners provide full test documentation and educational materials to support the customers' purpose of purchasing all-natural products to lead a healthier lifestyle.

We provide a safe, secure shopping experience in an industry full of uncertainty. Visit the Apotheca Store Locations to see what's in store for you.