What is HHC? What You Need to Know About This Cannabinoid 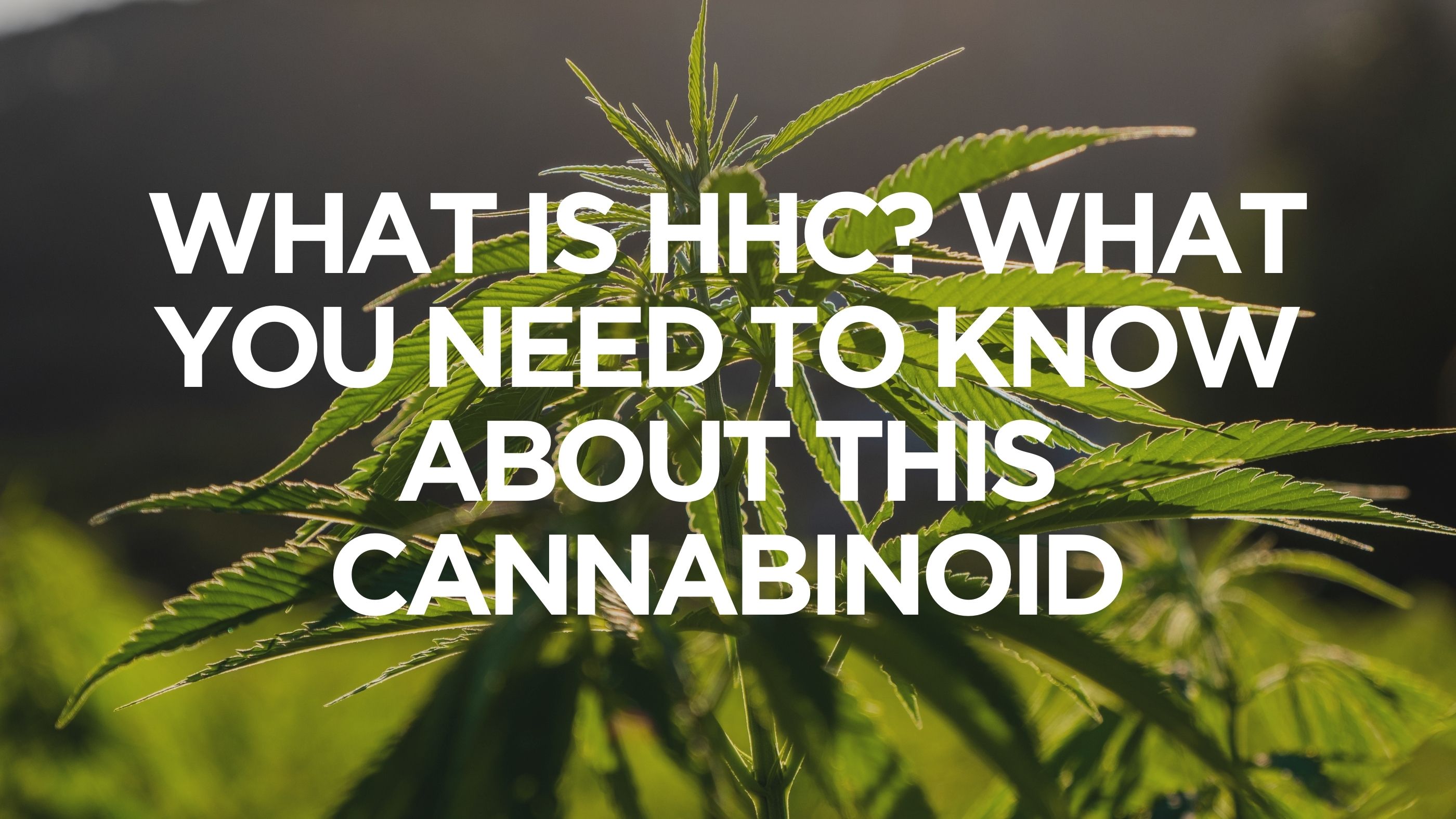 Hemp-derived cannabinoids have become very popular in recent years, and now the search for alternatives to the conventional Delta 9 THC and CBD is in full throttle. One of the most promising lesser-known cannabinoids is hexahydrocannabinol, or HHC. If you're always on the lookout for the best products on the market, you will naturally want to know: What is HHC, and what benefits can you get from it?

Since HHC, a naturally occurring compound, has been in the market only recently and not all retailers have it at the moment, it can be complicated to make sense of this cannabinoid. But people are already hearing about its potential. HHC is said to have effects similar to THC but with a big difference. Anecdotal evidence reveals that it doesn't appear on standard drug tests, although this part has yet to be confirmed.

Stability is another factor in the rising popularity of HHC among other cannabinoids - it's supposed to be super resistant to heat, oxidation, and UV light. This means your stash of HHC will last and retain its potency longer than other cannabinoids.

What is HHC, Anyway?

Although it was discussed by cannabis users just recently, HHC as a THC relative has already been known to science for a relatively long time. It's a minor cannabinoid found naturally in plants, but you can only find it in small amounts, making its extraction from hemp plants costly.

Due to its trace amounts, a sophisticated method is needed to obtain a usable amount. This process involves saturating THC with hydrogen atoms with the help of high pressure and a catalyst like palladium or nickel.

As a result, THC's double bond chemical structure breaks and gets replaced with hydrogen molecules. Nevertheless, the effect and potency of the cannabinoid remain intact.

The alteration in THC's structure increases its binding affinity with the CB1 and CB2 endocannabinoid receptors and TRP pain receptors. More importantly, the change in the molecular structure makes THC more stable. THC in its natural form is highly susceptible to degradation and oxidation.

On the one hand, when THC oxidizes, it loses its hydrogen atoms and forms two new double bonds. This formation, known as cannabinol or CBN, only contains around 10% of the psychoactive potency of THC.

On the other hand, HHC doesn't lose potency quickly when exposed to air and has shown incredible heat and UV light resistance.

How is HHC Produced?

Producing HHC involves a multi-step process. It starts with extracting CBD from the raw hemp plant and then distilling and isolating it to make it in powder form. It goes through a process called hydrogenation, in which hydrogen is added to the THC molecule, altering its physical structure.

Hydrogenation improves the stability of the cannabinoid and makes it more resistant to thermo-oxidative breakdown. It makes HHC less prone to heat and UV light damage and prolongs HHC's shelf life.

Will HHC Make You High?

Even though HHC is technically NOT THC, HHC's effects can give you altered visual and auditory perceptions, similar to those of THC. An HHC batch produced in a lab is a combination of active and inactive HHC molecules, with the active ones binding well with the body's cannabinoid receptors.

Some users report that the effects of HHC are more relaxing rather than stimulating, similar to the effect of Delta 8. The high can be described as somewhere between Delta 8 and Delta 9 THC.

How Potent is HHC?

Users claim that HHC effects gave them a pleasant and mildly cerebral high. It also soothes pain, particularly in the muscles. But some feel more energetic when on HHC. It makes them go to the gym and experience better brain function. They report the same pain-relief benefits as well.

How Safe is it to Consume HHC?

Hence, HHC companies and sellers are not required to provide proof of their product's purity and potency, although some sellers do include third-party lab testing results with their HHC products.

If safety and toxicity are your primary concerns when it comes to HHC, then you should purchase products only from sellers and dispensaries that produce third-party lab testing results. With lab test information, you can ensure that you get the right dose of HHC and lessen your chances of toxicity. The lab results also contain a report on the product's quality.

If you had already used HHC before and experienced adverse reactions, you should avoid retaking them. If you're taking a product, discontinue it immediately if it makes you feel unwell.

If your healthcare professional gives you the go-ahead to try HHC products, here's a refreshing one you should try: Delta Beverages HHC Seltzer Berry.

Let us talk about legalities. It's only natural to desire to know if you can consume HHC without getting into trouble, whether on a federal or state level. Technically, HHC should be in the clear since it's hemp-derived and not an actual THC.

According to federal law, HHC products such as vapes, edibles, and gummies are perfectly legal. On a state level, it remains legal almost everywhere. HHC is produced under "federally legal hemp extraction" and is non-synthetic since it's found in the seeds and pollen of hemp plants.

At the moment, HHC is in the gray area between hemp (which is legal in all states) and cannabis (which is not). Although not illegal, this means that consumers have to weigh the benefits and risks of consuming these other compounds for themselves until HHC becomes subject to a state-regulated system.

How is HHC Different From HHC-O Cannabinoids?

The process makes it bind more thoroughly with cannabinoid receptors, thus making it more potent. According to manufacturers, the potency range of HHC-O can go anywhere from 1.5 to up to three times the strength of HHC.

Does HHC Have Medicinal Benefits?

There have been some promising studies about the possible therapeutic benefits of HHC. A 2011 study revealed that some synthetic analogs of HHC "strongly inhibited breast cancer cell-induced angiogenesis and tumor growth."

There was also a paper published in 2007 that discovered HHC's impressive pain-blocking capability in mice. However, this research study is not enough to confirm the ability of HHC therapeutic-wise.

Will HHC Show Up in a Drug Test?

There is evidence that HHC does not metabolize into 11-hydroxy-THC, the breakdown substance analyzed in drug tests. It means it doesn't break down in the body in the same manner as Delta 8, Delta 9, and Delta 10. But it's not 100% certain at the moment, so it's not wise to risk losing your job by failing a drug test because of HHC.

How Do You Consume HHC?

HHC oil can be added to different products, the most common being HHC-infused vapes. You can also try HHC flowers, HHC cigarettes, and HHC gummies.

The effects of edible products with HHC may take longer to kick in. So if you want a much quicker effect, it's best to go with HHC vapes since HHC can enter the bloodstream much faster via inhalation.

You can't consume HHC directly from the cannabis plant. A laboratory process is needed to derive high concentrations of HHC.

By the way, HHC comes in salves too. Why not try the Apotheca CannaAid HHC 2oz Salve?

What is HHC cannabinoid, and what does HHC do? In a nutshell, here's what we know so far:

Does HHC get you high?

You will experience a high similar to THC when you take a dose of HHC. The high will give you a relaxing feeling, comparable to the effects of Delta 8 THC. It can be described as a euphoric high.

The potency of HHC is estimated to be roughly 70-80% the strength of THC. Hence, it is more potent than Delta 8 and Delta 10. Taking mild-to-moderate doses of HHC will result in a euphoric high similar to THC but is more relaxing and sedating, just like the effects of Delta 8.

How does HHC make you feel?

Many users report experiencing a gradual increase in their mood when taking HHC. For some, there's an increase in activity compared to other intoxicating cannabinoids. It may affect your headspace and cognition, but you will remain largely in control of your mind and body.

The effect of HHC is similar to that of Delta 8 THC, which has a milder high than the usual Delta 9 high. There's a psychoactive high, but none of the paranoia and other unpleasant side effects associated with Delta 9.

But there is a difference between the highs of HHC and Delta 8. The effect of HHC is more like what you get from a Sativa cannabis variety, while Delta 8's are similar to those from an Indica or Indica-dominant hybrid variety.

Being on an HHC high will make you energetic enough to do your daytime tasks, while a Delta 8 high will make you want to bond with your couch. Nevertheless, both are incredibly relaxing and devoid of the paranoia effect usually associated with using a typical Delta 9 cannabis.

Much research has to be done on HHC and its effects, but there's no indication that HHC is less safe compared to THC. So far, there have been no reports of adverse effects, overdose, or death from using HHC and its products.

It has side effects, but these are not severe or life-threatening. You may get anxiety, paranoia, sleeping problems, rapid heart rate, reduced blood pressure, and increased appetite. However, these are all temporary effects.

That said, since the legal status is cleared, nothing should stop you from trying HHC at one point or another. Everyone deserves the perfect HHC experience, which you can get by buying only the highest quality HHC products at online stores and dispensaries you can trust.

Buy Only the Best HHC Products At Apotheca

If you're in the North Carolina, Tennessee, and Georgia areas, Apotheca can give you the HHC and hemp products you need. Our mission is to provide clean, affordable, and sustainable alternative remedies to modern medicine for people and plants.

Apotheca's team researches, tests, and curates partner brands that put people first before profit through intent and action. No marijuana product reaches our store shelves without being thoroughly tested for quality and efficacy.