What is CBG: What You Need to Know About the "Mother of All Cannabinoids" 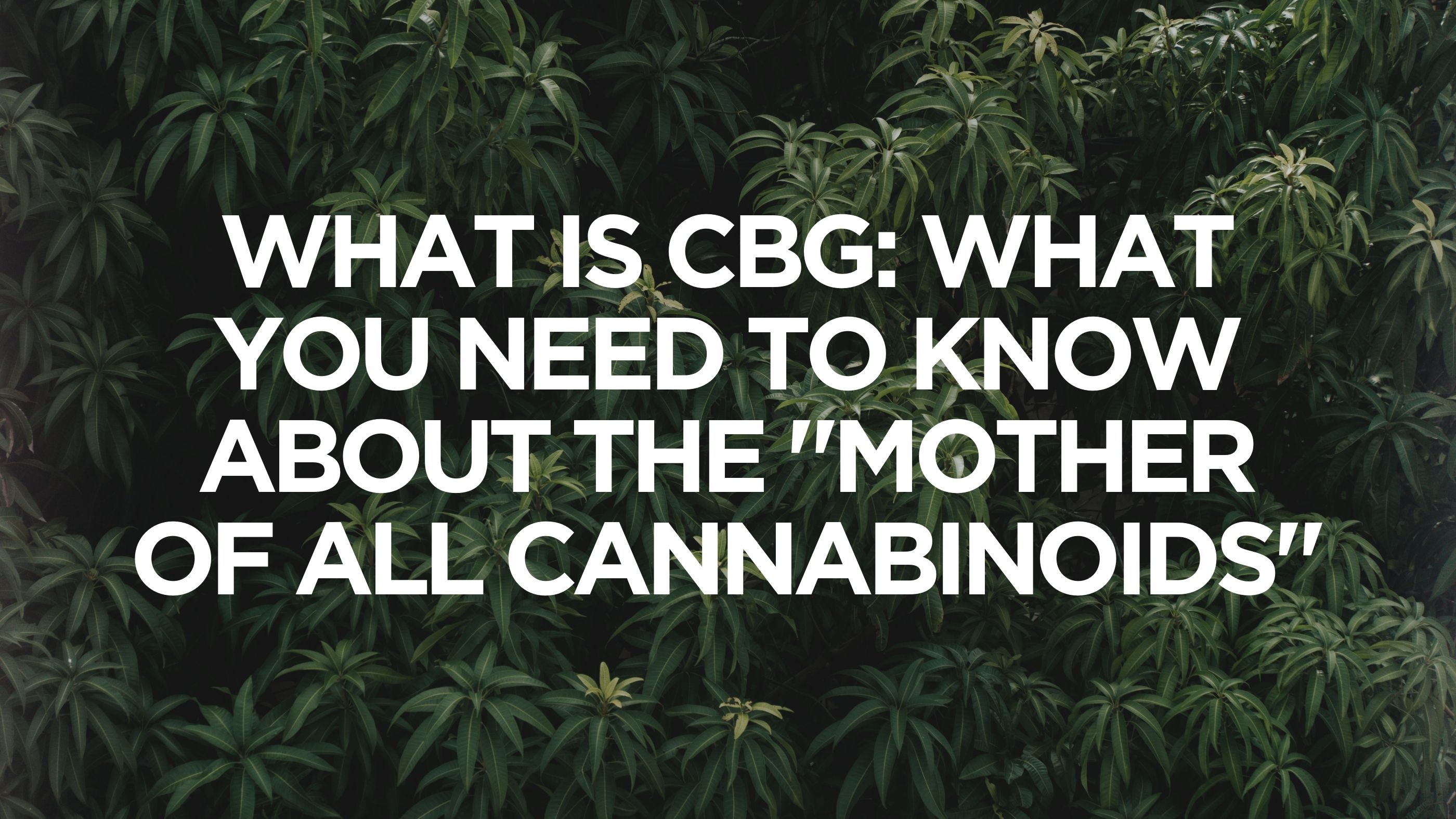 CBD (cannabidiol) and THC (tetrahydrocannabinol) products are undeniably the most popular cannabis products on the market. But now that science is gaining access to the other cannabinoids found in the plants. We are getting to know more about CBG, or cannabigerol, one of the minor ones.

With dispensaries introducing CBG products to customers, it would be great to get to know more about this minor cannabinoid. It has been around for years, and humans have been enjoying its benefits for a very long time already. It is referred to as the "mother of all cannabinoids, and here you'll know why.

CBG is a cannabinoid extracted from the cannabis plant. What makes it the mother of them all is it being a product of the precursor to CBG, which is an "early phase" cannabinoid called CBGA. This stage is where all the cannabinoids start.

As the plants develop and absorb more UV light, the CBGA breaks down and transforms into CBDA and THCA, which are the acidic precursors to THC and CBD, the most popular cannabinoids now. Only a very small amount of the cannabinoids will become CBG.

This is why CBG is derived from young cannabis plants, which contain higher amounts of CBG than fully grown plants. When the plant develops, most of the CBG will be converted to CBD and THC, thus leaving only small amounts of CBG.

How Does CBG Work in the Body?

CBG binds to both receptors, where it's supposed to make the function of the anandamide stronger. Anandamide is a neurotransmitter that contributes to alleviating pain, regulating appetite and sleep, and enhancing motivation and pleasure. CBG has no psychoactive effects, unlike THC. So this means CBG works but will not get you high.

Are you looking for an easy, convenient way to take your daily CBG? These CBD/CBG Soft Gels from Apotheca are just what you need.

What Are the Health Benefits of CBG?

Even though it's very scarce, CBG can benefit the human body. Despite its connection to THC, a psychoactive cannabinoid, CBG is non-intoxicating and does not give users a high. And because it can interact with CB1 and CB2 receptors, CBG can counteract the effects of other cannabinoids, such as the psychoactive compound THC.

A patient survey released in 2021 found that CBG-dominant products effectively treat anxiety, chronic pain, and insomnia. Aside from that, CBG has other supposed therapeutic benefits for other conditions, which are:

Inflammatory Bowel Disease or IBD is a condition that causes a patient to have chronic inflammation in the bowel. This incurable disease affects millions of people all over the world.

An experimental animal study in 2013 reported the effects of CBG on mice with experimental inflammatory bowel disease. CBG was able to reduce the inflammation and production of nitric oxide. CBG also slowed the formation of reactive oxygen species (ROS) in the intestines. The study, therefore, concluded that CBG should be used for clinical experimentation in patients with IBD.

An animal study revealed that CBG could potentially contribute to the treatment of glaucoma. Researchers reported a reduction in eye pressure and increased aqueous humor outflow among cats administered with glaucoma.

Huntington's Disease causes the nerve cells in the brain to break down. A 2015 study examined the potential neuroprotective properties of CBG and other cannabinoids in mice with experimental models of the disease.

It reported that CBG served as a neuroprotectant, protecting the brain's nerve cells from damage. It also enhances motor deficits and preserves striatal neurons against 3-nitropropionic acid toxicity.

A 2014 study on the effects of CBG on rats with colon carcinogenesis reported that CBG showed potential in blocking the receptors that cause cancer cell growth and inhibiting the development of colorectal cancer cells. The researchers recommended that CBG be considered for curing and preventing colon cancer.

How to Use CBG

The most common CBG product for commercial consumers is CBG oil. You can enjoy the benefits of CBG by using pure CBG oil. However, the scarcity has made pure CBG oils generally rare and expensive.

When you take cannabinoids together, you increase the product's effectiveness through a phenomenon called the entourage effect.

CBD and CBG are similar in a lot of ways, and both act on the body's endocannabinoid system. This is why the two are often compared. Both cannabinoids are non-psychoactive, which means you can use either of them without getting your state of mind altered, unlike when you use THC.

The major difference between CBG and CBD is their quantity in most cannabis plants. There's usually more CBD, which can account for 25% of cannabinoids found in the plant, while there's only 1% CBG, or even less, found in them.

The way they interact with our endocannabinoid system is different too. CBG binds directly to both CB1 and CB2 receptors, which can make it more efficient at delivering its benefits to our bodies, specifically issues related to the nervous system. On the other hand, CBD can be more effective in addressing conditions associated with immunity and regulating mood disorders.

Taking your CBG discreetly and conveniently is easy when you use CannaAid Delta 8/CBG Tincture.

Given the rarity of CBG, you may have to use cannabis products with a broad spectrum of cannabinoids and terpenes. In this case, strains that are not necessarily CBG-dominant but still have enough for you to reap the benefits. Take a look at some of the best THC strains that contain CBG:

This hybrid cannabis strain is created by crossing Purple Kush with Lemon Skunk. It comes in small buds coated in a layer of trichomes on top of bronze pistils and jade foliage. Pink Lemonade is popular for its calming effects, the sort that puts your mind in a haze and your body radiating in relaxation.

The smell is like those of a fruity, mentholated tea; when you exhale, you taste lemon and grapefruit. Pink Lemonade is commonly used by medical cannabis patients in treating symptoms related to stress, focus, and depression.

This thick and leafy plant is a cross of several strains - Black Cherry Soda, Pink Lemonade, Ace of Spades, and Original Glue. Its medium-sized buds are lightly coated with trichomes. It has sweet citrus notes with cheese undertones, which is a result of its complex genetics. The effect of this blend leaves you euphoric and upbeat but still gives you clear-headed focus.

Named for its hit of tropical flavors that are sweet and fruity, this Sativa cannabis strain is a product of crossing Northern Lights, Haze, and Skunk. Fruit Punch fills you with social and creative energy, so this is best taken when you're doing your hobbies or having active days with friends.

Blueberry Muffins is an Indica-dominant cannabis strain that is a cross of Purple Panty Dropper and Blueberry. It's known for its purple-tinted flowers and uniform bud structure. As the name suggests, the strain's flavor profile smells like freshly baked muffins. This tasty joint has a succulent sweetness that is balanced by a smooth, creamy finish.

Also called Animal Crackers, this hybrid, clone-only strain is a cross of Fire OG and Girl Scout Cookies. It flowers in 9 to 10 weeks and produces dense buds of frosty green tipped with purple.

Fitting for its name, this strain has a sour and sweet aroma with a full-body effect that will make any veteran user happy. Because of this potency, this is better suited for alleviating insomnia and severe pain.

This crossbreed of Jack the Ripper and Black Cherry Soda has a sweet and sour combination that makes it an ever-popular favorite. It has an earthy citrus and berry smell and a distinct lemony taste. This tall and bushy plant grows fast and produces pretty buds in various colors, such as pinks, blues, purples, and a coat of orange hair.

Just like other cannabis products, using high-quality CBG products is crucial. To make sure that you don't get anything less, you have to get your supply from reputable stores that provide the documentation to prove the safety and authenticity of their products.

What does CBG do for the body?

CBG is known for relieving symptoms of anxiety, chronic pain, and insomnia. It's also noted for its antifungal, antibacterial, and antiparasitic properties. It can reduce inflammation without giving the user the intoxicating effects and psychoactive properties that THC is known for.

It has been shown as a promising treatment for certain health conditions such as inflammatory bowel disease, Huntington's disease, glaucoma, and cancer cell growth.

Is CBG stronger than CBD?

CBG and CBD share many similarities in health effects, but some studies indicate that CBG is more potent. Aside from being a powerful anti-inflammatory and antibacterial agent, CBG is also a vasodilator (can keep blood vessels open and flexible) and a neuroprotectant (can encourage the development of healthy neural pathways).

CBG has exhibited strong anxiolytic qualities, as it relaxes muscles and increases dopamine which can decrease one's anxiety. It is also said to improve focus and energy, which is linked to a better overall feeling of well-being. And because of its dopamine-boosting qualities, it can help those who have symptoms of depression by triggering better mood and self-esteem upon activating the body's serotonin receptor.

Is CBG good for your brain?

CBG has shown encouraging results in reducing neuroinflammation, which is associated with many diseases such as Huntington's and Parkinson's disease. CBG also helps regulate oxidative stress, which is linked to many neurodegenerative diseases.

Buy Only the Best CBG Products At Apotheca

If you're in the Georgia, North Carolina, and Tennessee areas, Apotheca can give you the high-quality CBG oil and other CBG products you need. Our mission is to deliver clean, affordable, and sustainable alternatives to modern medicine for people and plants. We care for the well-being of our customers and ensure that you get only the best products available on the market.

Apotheca's team researches, tests, and curates partner brands that prioritize people before profit. All the products that reach our store shelves have been thoroughly tested for quality and potency. We ensure the safety and quality of the products that our customers purchase and use.