The Myths and Truths About Kratom 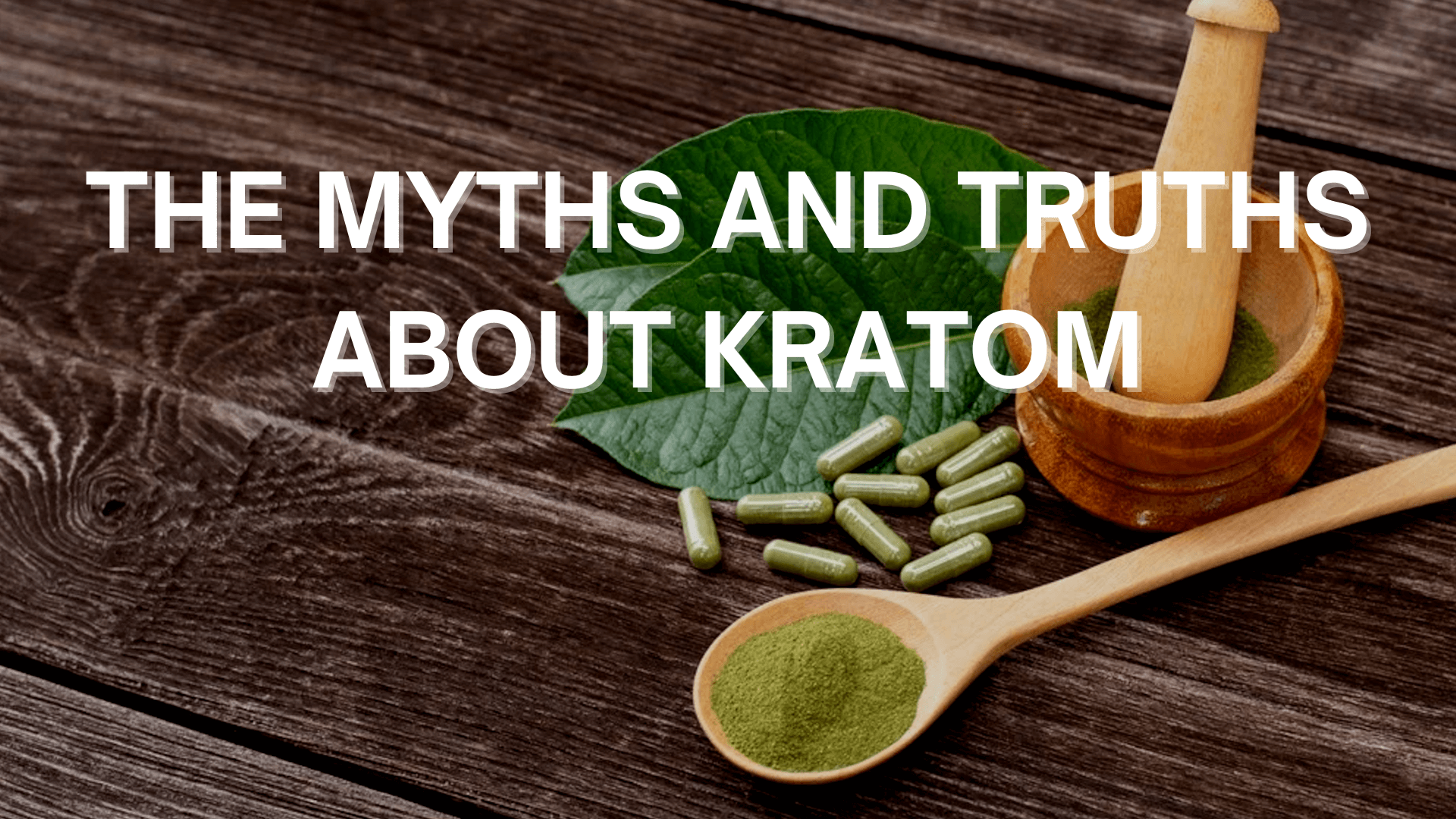 For generations, practitioners of traditional medicine have used kratom as a tool. Many people claim that kratom's main effect is a feeling of well-being, which gives users a sense of serenity and positivity. But there are many myths and falsehoods about kratom and its effects. It's only natural to wonder about the myths and truths about kratom.

It is prohibited in various places, including Australia, Malaysia, and some EU member states. In contrast, the United States and other nations have not passed any legislation banning the commodity. Making an informed choice about using Kratom can be aided by understanding what it is and is not. By separating fact from myth, you can decide if Kratom is a viable supplement option for your lifestyle.

Kratom is believed to have originated in Southeast Asia. Kratom is a member of the evergreen family and is linked to the coffee plant. The trees can reach heights of up to 80 feet and have enormous flowers and leaves. Mitragyna speciosa is the scientific name for the Kratom tree. These plants are mostly found in the Philippines, Malaysia, and Thailand.

Western explorers used Kratom for the first time in the early 18th century. Local anecdotal evidence suggests that tribal tribes in Southeast Asia have been using Kratom as part of their traditional herbal medicine regimen for millennia. Native Americans chewed the leaves or dried and crushed them to make tea powder.

Because Kratom has a naturally bitter flavor, local users frequently blend it with other substances or sweeteners. Smoking kratom leaves was also a part of Native American rituals.

Farmers and other manual workers frequently utilized Kratom in some form to help them cope with the stress of daily life. Today, kratom is used for the same purposes in Western society. Users claim that Kratom can help people cope with the stresses of modern life; using the herb helps people stay relaxed.

Do you want the most convenient way to take kratom? Kratom capsules are the best way. Try Apotheca Kratom Capsules.

What Are the Different Types of Kratom?

The title "kratom" is used by the majority of retailers nowadays, but it may also be offered under the names Thom, Kakuam, Biak, Ithang, Kratum, and Ketum. Commercial Kratom producers typically distinguish the three strain types: red, white, and green. There are different kratom strains, and each has a somewhat unique alkaloid makeup.

Red vein kratom is frequently used to encourage calmness and peace. Users of white kratom find that this variety helps to improve alertness and cognitive function. Similar effects to those of white are supported by green, including an increase in optimism and harmony in your mood and physical well-being. Numerous products mix two or more strains to improve your health in a variety of ways.

How is Kratom Produced?

Reputable vendors put their kratom through a stringent production and quality control procedure before selling it. While some leaves for Kratom come from plantations in Southeast Asia, other leaves come from trees that grow naturally in the continent's forests and jungles.

So that the alkaloid levels and leaf maturity are ideal, local Kratom harvesters guarantee that the agricultural workers take the leaves from the trees at precisely the proper moment. After harvesting the leaves, the employees transport the recently harvested greenery to a drying facility. Each color or strain has a separate drying process.

Kratom is typically dried outside in the sun, though producers occasionally bring green vein kratom inside for an hour or two. Red vein leaves must first be dried indoors for two days before being taken outside for an hour to dry in the sun. This process produces white vein kratom.

Growers and sellers dry red vein Kratom by utilizing ultraviolet (UV) lights or direct sunshine. Fermentation is also applied to red vein kratom. The red vein Kratom leaves are placed in bags indoors by farmers for fermentation. Depending on your desired outcomes, fermentation processes can run from two to five days. The color of the powder increases with fermentation time.

Speaking of kratom powder, go for the safest products in the market, such as Apotheca Kratom Powder.

Myths and Truths About Kratom

Kratom Is Not Addictive

According to Mayo Clinic, kratom is commonly used for various things, including recreation, an attempt at drug detox from opioids or other substances, and pain management. Although its legality differs by jurisdiction, accessing it is typically not too difficult. In reality, accessibility is one of the main reasons many individuals think the substance is benign or non-addictive.

However, this is one of the myths about kratom because it has a risk of opioid addiction. The National Institute on Drug Abuse claims that kratom has effects comparable to opioids and stimulants (NIDA). Mitragynine and 7-hydroxymitragynine, two of the most active chemicals in kratom, interact with opioid receptors in the brain to cause sensations of pleasure, reduced pain, sedation, sociability, and exhilaration.

Kratom Has No Advantages

Even though not much research has been done on kratom, the drug may have some advantages. In Southeast Asia, where it originates, it has historically been used to treat morphine dependence and other medical conditions. The most traditional use of kratom is as a tea; manual laborers there have used it to fight fatigue and increase work productivity for as long as they can remember. However, there is a strong tradition for kratom use, especially in socio-religious ceremonies.

In the ongoing discussion around kratom, some experts claim that it is "unsafe and ineffective," while other scientists believe it has both benefits and concerns. Although it does come from a tropical tree, making it "natural," there are still hazards involved. Nausea, itchiness, sweating, dry mouth, constipation, increased urination, lack of appetite, convulsions, and hallucinations are a few of the health consequences of kratom. Additionally, some people receive treatment for kratom addiction even though the danger is modest. There isn't a definite agreement yet on all of kratom's harmful effects.

Kratom Is the Same in the West and Southeast

The dried kratom leaf products sold commercially in the US have a different chemical composition than the traditional kratom consumed as tea in Thailand and Malaysia. 7-hydroxymitragynine is a chemical component of kratom and is generally regarded as a more dangerous component of the drug; it was almost banned in the US in 2016.

Unexpectedly, 7-hydroxymitragynine cannot be found in traditionally brewed kratom tea. There appears to be a distinct difference in how kratom is consumed, as US users are more likely to find it easily online as a pill or capsule. More research is required to fully understand how the various preparations of kratom affect its composition.

Kratom is a special substance because of its intricate chemical makeup. Depending on how much is ingested and how it is consumed, it might have different effects on the consumer. The drug's stimulant effects at low doses are similar to those of cocaine and amphetamines.

However, a high dose might approximate the narcotic symptoms you could experience after eating opiates. The substance is risky and unknown since its effects depend on how it is used; when combined with other medications, it may be fatal, and even when used alone, scientists are still attempting to decipher its complex chemical composition.

There is No Risk of Overdose With Kratom

According to Ghosh, kratom can still cause overdoses in people, generally when combined with other drugs. It has a depressive effect and can therefore result in overdosing.

NIDA reports that there have been numerous reports of fatalities brought on by kratom use. The FDA recorded approximately 44 kratom-related deaths in 2017, one of which involved the use of pure kratom. However, the consumption of kratom, along with other drugs like alcohol, opioids, and benzodiazepines, was a factor in most of these kratom-related fatalities.

Additionally, according to NIDA, many of these fatalities seem to have been brought on by the use of tainted kratom products. For instance, there have been allegations of harmful compounds being added to some kratom items marketed as nutritional supplements, resulting in fatalities.

A Mayo Clinic study from 2018 found that over 130 people had become ill from salmonella germs that had gotten into kratom products. Salmonella poisoning can be lethal in some circumstances.

People all over the world are now utilizing it to alleviate pain and manage opioid withdrawal symptoms. However, the safety and effectiveness of kratom need more research. Kratom products are available in places (such as herbal or smoke shops) and online in the United States. However, there are no FDA-approved applications for kratom. Many kratom products have been found to contain dangerous impurities such as heavy metals and microorganisms. This is why you must buy only from reputable sellers and shops.

What does kratom do?

Kratom, an Asian evergreen tree product that contains the stimulant mitragynine and the narcotic 7-hydroxymitragynine, is used by up to 5 million persons in the United States. The drug has been promoted as an alternate method of pain relief.

The most traditional use of kratom is as a tea; manual laborers in Southeast Asia have used it for centuries to alleviate fatigue and increase job productivity. While there is a strong tradition of kratom use, particularly in socio-religious rites, more research is needed about the plant's potential significant advantages.

Can you overdose on kratom?

While a kratom overdose is possible, it is unlikely to result in death. Nonetheless, a kratom overdose can have hazardous effects on the body. Furthermore, combining kratom with other medications, such as opioids or benzodiazepines, raises the risk of a life-threatening overdose. Overdose of kratom might cause the following symptoms such as seizures, high blood pressure, problems with the liver, and accelerated heart rate.

How does kratom affect the body?

There have been a variety of reported effects of kratom. Increased energy, alertness, and a quick heartbeat are stimulant-like effects. Consciousness reduction, pain alleviation, and confusion are opiate-like effects. Kratom's effects on the brain, its interactions with pharmaceuticals, and its potential for therapeutic application are all subjects of research. However, research is still in its infancy.

The liver can be severely damaged by kratom. The medication has been related to serious liver conditions such as hepatitis, which inflames the liver. Typically, liver issues appear one to eight weeks after a person takes the medication regularly. Some symptoms include fatigue, nausea, skin itch, Cola-colored, dark urine, and yellow eyes or skin.

Related Question: How Long Does Kratom Stay in Your System?

If you're in the North Carolina, Tennessee, and Georgia areas, Apotheca can give you the kratom strains and products you need. The store's mission is to provide clean, affordable, and sustainable alternative remedies to modern medicine.

Our team at Apotheca researches, curates, and tests products from partner brands that put people first before profit. No product reaches Apotheca's store shelves without being tested thoroughly for quality and efficacy.