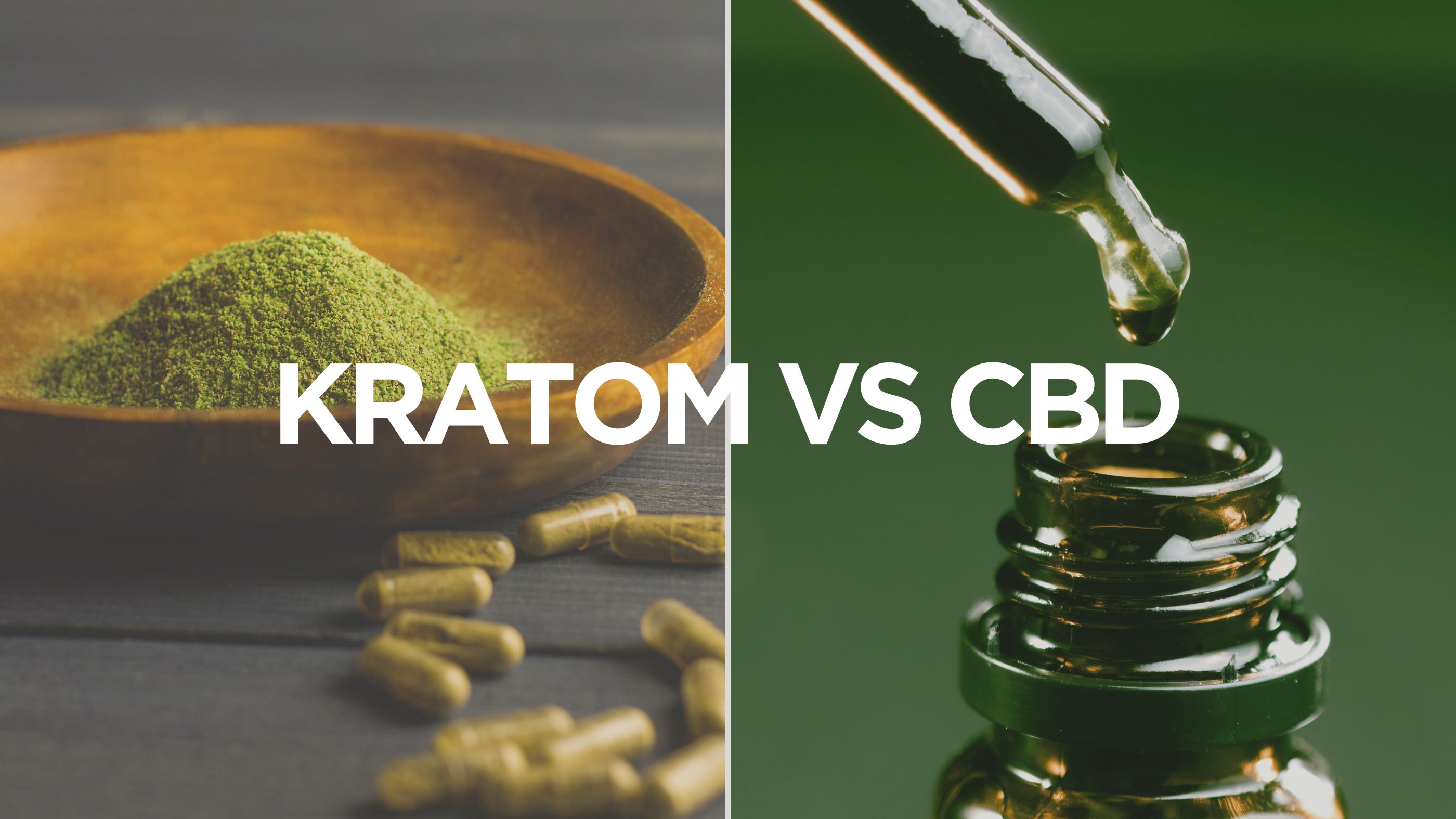 Chances are, that you are already familiar with cannabidiol (CBD), given its popularity. But there’s another natural pain relief option that is fast becoming as popular as CBD. Kratom, which is a tree species from Southeast Asia, has become an alternative for those seeking a natural pain reliever. It is said to soothe symptoms of various medical conditions such as anxiety, arthritis, fibromyalgia, and opioid withdrawal.

Since cannabidiol is known for providing relief for the same conditions, one would naturally wonder, which one is better. Is it kratom or cannabidiol? This is why it’s important to compare and contrast the two so that you can choose which is the better option for your pain relief issues.

Also known as mitragyna speciosa, kratom is a tree that originated in Southeast Asia, but you can also find it growing naturally in other Asian countries like Indonesia, Malaysia, and Thailand.

The main ingredients of the plant are mitragynine and 7-Hydroxymitragynine (7 HMG). These compounds interact with the body’s opioid receptors, inducing their effects. The therapeutic effect comes courtesy of the chemical mitragynine while the psychoactive effects are attributed to 7 HMG.

The effects of kratom are stimulating, similar to the feelings you can experience with drinking coffee. This is why kratom has become popular for boosting energy levels and enhancing productivity while working.

If you consume high doses of kratom (more than 7 grams of the leaf), you will experience an entirely different range of effects. There are euphoric and analgesic benefits, which are caused by the alkaloid in the leaves. The alkaloids target opioid pain receptors. Taking this much kratom can also give you a sedative feeling, which in this case will supersede the stimulant effect that it initially had.

Kratom in lower doses is primarily used as an alternative to coffee, while higher doses serve as an option to replace alcohol or prescription pain medications.

Now it’s important to discuss CBD in order to distinguish the difference between this and Kratom. Cannabidiol, which is a compound found in the cannabis plant, is extracted in oil form. The oil is then processed and sold in different types of products, which include capsules, tinctures, and CBD-infused edibles.

There are several methods of extracting cannabidiol, ranging from CO2 extraction to using solvents like butane or ethanol. Other cannabinoids and terpenes can be found in CBD oil since it’s made from the whole plant. Cannabidiol oil of this kind produces full-spectrum cannabidiol products.

On its' own, cannabidiol can be quite adequate already, but it’s even more effective when consumed with other cannabinoids, such as THC. By law (depending on where you are), full-spectrum CBD oil products can contain up to  0.3% THC.

There are also cannabidiol oil products that don't have other cannabinoids or terpenes. These are called CBD isolate products. This is preferred by users who would rather not test positive for THC, which comes with consuming full-spectrum products.

Just like full-spectrum products, isolate CBD can be consumed via a wide range of derivatives, such as vape liquids, capsules, tinctures, and gummies.

An Introduction to CBD will tell you more about it.

What Are The Other Uses For Kratom?

Pain relief is the most popular use for kratom. Apart from reducing pain, users claim that it can also cause the body to relax, as well as to boost one’s immune system. An online survey done in collaboration with the American Kratom Association revealed that more than 90% of participants found kratom as an effective pain reliever.

Kratom is also used for substance withdrawal, most especially from opioids. Those who are addicted found kratom to be helpful in weaning them off powerful opioids such as heroin, fentanyl, and oxycodone.

There are users who found kratom effective in eliminating the symptoms of opioid withdrawal as well. When used as an opioid substitute, kratom can help drug users to get off heavy narcotics and continue to live normal, healthier lives.

Check out Kratom Concentrates - Everything You Need to Know to learn more about kratom in its' liquid form.

How Can You Consume Kratom?

You can chew, smoke or drink kratom as a tea if you consume it in its' natural form. Usually, kratom is turned into powder and mixed with liquid, which is often warm water. One difference here of kratom from cannabis is that you don’t need to heat kratom in order to activate it.

This is why you can safely and effectively consume kratom in its raw form, usually as capsules. You can also mix kratom with foods or other liquids, which will make it easier for you to ingest. Mixing kratom with yogurt is actually a popular practice.

Here are the correspondences and contrasts between kratom and cannabidiol:


In the end, kratom and cannabidiol are two very different herbally derived products. Cannabidiol has the advantage of being a lot more recognized, backed by scientific research, and user testimonials. The fact that it has no dangerous side effects is also a major plus.

Which Is Better For Pain Relief: Kratom Or CBD?

Cannabidiol has long been popular and established for reducing various types of pain. Studies have confirmed CBD’s anti-inflammatory properties and its' ability to lessen inflammation related to arthritis, as well as pain and swelling. It has also been said to help in preventing nerve damage and degeneration.

CBD is also found to relieve neuropathic pain from multiple sclerosis, according to researchers. When it comes to relief from headaches and migraines, however, more research may be needed to confirm if cannabidiol is indeed effective in this regard.

There is less scientific evidence when it comes to the benefits of kratom, but it should be stressed that it doesn’t mean this leaf is less or not effective at all. This can be resolved in the future given the amount of interest in kratom, which means there will be more kratom-related studies up and coming.

But what is already available on kratom is quite promising. Aside from the information mentioned above, there’s also a review of available medical studies done in 2017 which concluded that kratom is effective in reducing pain, inducing relaxation, and improving the immune system.

Other sources point out that cannabidiol effects are better for chronic pain while kratom is more suited for acute pain. CBD, which works through the endocannabinoid system, modulates the series of receptors involved in regulating homeostasis. Because of this, cannabidiol is considered effective in regulating the volume of pain signals that are headed toward the brain.

It should be noted that cannabidiol doesn’t block pain entirely, but it does a terrific job of at least reducing the severity of pain.

The way it works is very similar to how prescription painkillers such as oxycontin and morphine function.

This is why CBD is more recommended for inflammation-related pain since it reduces the pain signals in the short term. Getting the full benefit may take some time though - it could be several days, weeks or even months.

Kratom is good for just about any type of pain in the short term. But long-term use is discouraged given its addictive properties. Because kratom directly blocks the opioid receptors, it offers fast and effective pain relief for any type or level of pain.

Which Is Better For Sleep: Kratom Or CBD?

CBD is the obvious choice here given its sedative properties. It can help to induce sleep effectively and addresses the different causes of insomnia. Also, you may only need smaller doses of cannabidiol to get the restful sleep that you need. It can already calm your nervous system and cause your busy and anxious mind to relax come bedtime.

Cannabidiol will also aid if you have joint or muscle pain that keeps you up at night. By directly reducing your cortisol levels, you can reach that deeper state of sleep that your mind and body need.

Check out Apotheca - CBD for the best products to help you sleep better.

Kratom is a stimulant, although it can be a sedative for some. This makes it a hit or miss for those who have sleep problems. You could end up having worse insomnia if you take the wrong dose or the wrong strain. Higher doses can definitely make you sleep- but as mentioned above, taking high doses of kratom is not commonly recommended given its' uncomfortable side effects.

Side Effects Of Kratom And CBD

Kratom’s addictive potential due to the presence of 7-HMG warranted negative attention from the US Food and Drug Administration. A 2014 survey confirmed that almost all of the participants who used kratom for more than 6 months showed signs of addiction. They also showed both physical and psychological symptoms, including sleeping difficulties, pain, and anger.

Kratom can also cause one to have a dry mouth, become nauseous, develop itching, and have appetite loss. Serious side effects such as seizures and aggression are also possible, although these are rare problems. And while it’s possible for one to overdose on kratom, you will need extremely high doses to reach that point.

In contrast, cannabidiol appears to be safer since reports only cited mild and limited side effects; such as dry mouth, drowsiness, and nausea. It was also identified as non-addictive by the World Health Organization in 2017.

Although like in the case of kratom, potential issues can arise when there’s a lack of oversight. These issues include fake CBD oil, contamination, and cannabidiol products that have dangerous chemicals.

Whether you are going for kratom or cannabidiol, the important thing to note here is to buy products only from trusted retailers. High-quality dispensaries and retailers are specific about the ingredients of their products and how they are manufactured.

These vendors also make it a practice to share third-party lab tests online to prove that their products are safe and are of high quality and authentic potency.

Buy only the Best Kratom and CBD Products At Apotheca

If you’re in the North Carolina, Tennessee, and Georgia areas, Apotheca can give you the kratom and cannabidiol products you need. Our mission is to provide alternative remedies to modern medicine that are clean, affordable, and sustainable for both people and plants.

Apotheca’s team researches, tests, and curates partner brands that put people first before profit through intent and action. No product reaches their store shelves without being thoroughly tested for quality and efficacy.

In an industry full of uncertainty, Apotheca provides a safe, secure shopping experience.

Visit the Apotheca Store Locations to see what’s in store for you.