Kratom and Mitragyna Javanica: What Is the Difference? 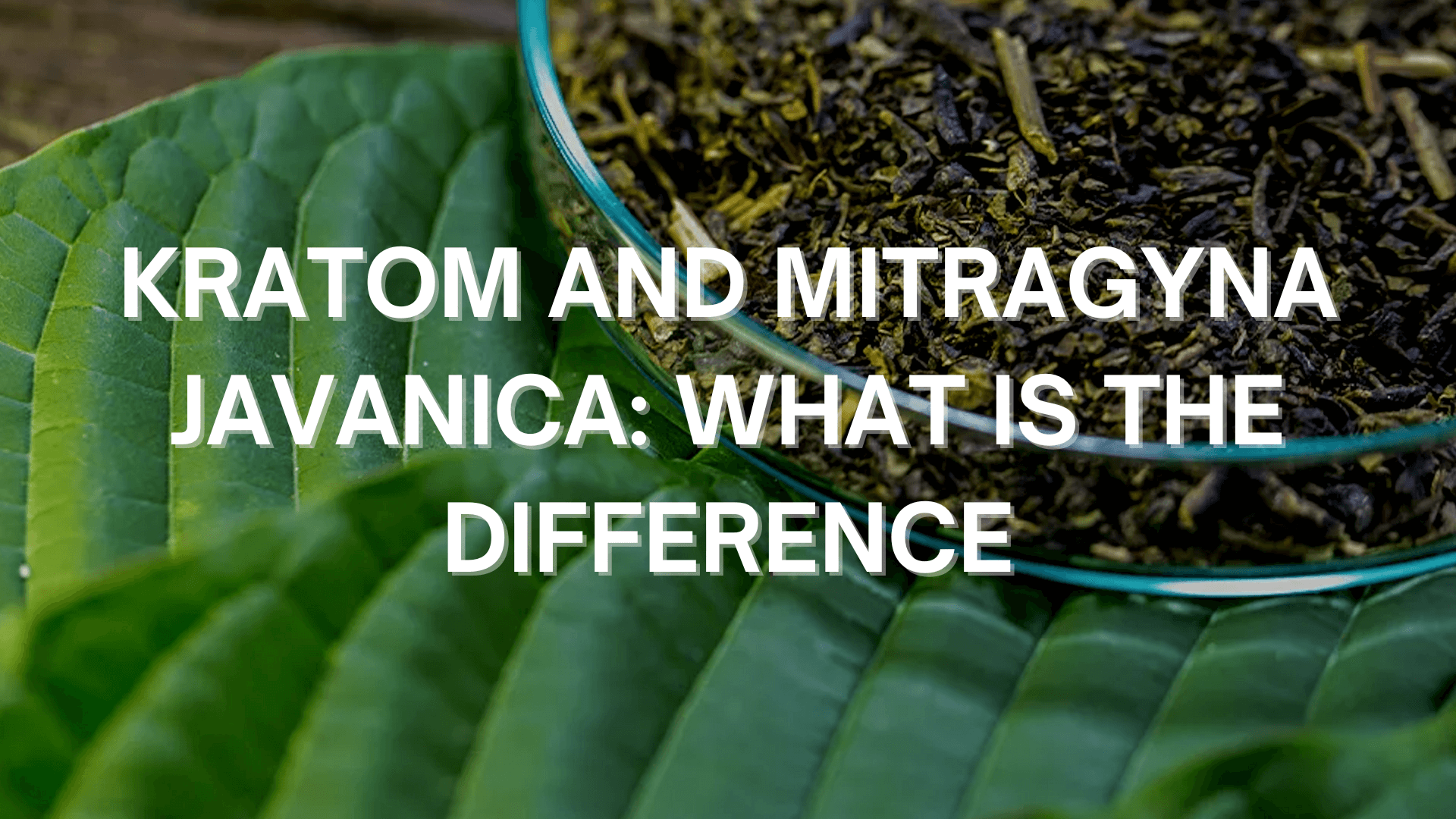 People who live in areas where kratom is prohibited or inaccessible look for other options. Numerous Kratom variants can provide you with similar effects and benefits. Mitragyna Javanica, also known as Kra Thum Na, is the popular alternative to kratom in terms of both effects and benefits. However, this has left many kratom enthusiasts perplexed as to which is the best: Kratom or Mitragyna Javanica?

If you're torn between the two incredible herbs and don't know which to choose, then this is where you will learn the key differences and similarities between the two herbs. This will allow you to determine which one is the best for your needs.

Kratom, or Mitragyna Speciosai, is a herbal supplement with psychoactive qualities comparable to but less harmful than drugs. Kratom leaves and the tea made from them have analgesic and energizing properties. Kratom leaves are said to be used to treat diarrhea in Thailand by people with medical backgrounds.

Whether dried or fresh, Kratom leaves are typically chewed or made into tea rather than smoked. It is typical to powderize kratom and put the powder inside capsules. Kratom has energizing effects at low doses and is effective at reducing fatigue at the workplace. It may have sedative effects at even higher doses, making it helpful for people looking to unwind or reduce stress.

More than 40 structurally related alkaloids, numerous flavonoids, terpenoid saponins, glycosides, and different polyphenols can all be found in Mitragyna Speciosa. These specific phytochemicals bring on the physiological effects of kratom. Mitragynine and 7-hydroxymitragynine, both found exclusively in Mitragyna Speciosa, make up most of these compounds and are concentrated in the leaves.

Due to its use as a replacement for withdrawal from drug abuse, specifically opiate withdrawal symptoms, kratom has a relative amount of global fame. In addition to its potential advantages, kratom has a dosage-dependent addictiveness.

However, there hasn't been enough data analysis to determine whether kratom's negative effects outweigh its positive effects because there isn't enough clinical data and research on it.

What Is Mitragyna Javanica?

Both kratom and Javanica are members of the Mitragyna family biologically. They have the same last name in addition to some other striking similarities. Both are native to Southeast Asia and have similar broad leaves and tall, sturdy stems, making it impossible to tell them apart with the naked eye. However, this does not explain how similar they are in all respects; each herb has unique potential and effects.

Mitragyna Javanica possesses almost all of the Kratom-related alkaloids chemically. However, due to the paucity of research on Javanica, we are unable to map all of its different alkaloids. The absence of Kratom's X-factor, namely mitragynine and 7-hydroxymitragynine, accounts for its less potent psychoactive effects. You experience an immediate boost of pleasure, ease, and euphoria as a result.

Despite their similarities, kratom and Javanica still differ greatly from one another. Think about the cousins in your family who share the same appearance but are very different people. The same is true of Mitragyna Javanica and Kratom.

Kratom is extremely bitter to the tongue, which reduces its likelihood of use. In contrast, Javanica is well known for its less bitter and nearly bland taste, making it a better option. People frequently combine kratom with peanut butter and other edible herbs to make it bearable to taste. Even users of Javanica have complained that it has no taste at all.

Javanica is a potent herb with a lot to offer; it has outperformed its medical benefits and is widely used in Southeast Asia to treat illnesses like malaria. It has also shown promise in treating fever and stomach issues and is a well-known pain reliever.

A common cause of death and one of the world's most prevalent disorders, high blood pressure, is also known to be controlled by Mitragyna species. Hopefully, Mitragyna will soon be widely used to treat high blood pressure and other underlying conditions as a result of additional research and studies examining its advantages.

Even though kratom is legal in many countries and welcomed in many states, the U.S. Food and Drug Administration has issued a warning to consumers regarding the use of kratom and plans to go even further by adding kratom to the list of dosage-controlled substances. As a result, Javanica has gained popularity as a viable alternative.

In contrast to Kraton, Javanica has no negative connotations, has fewer side effects, and is currently legal in Thailand and all 50 states. It's known as the New Kratom and is becoming incredibly popular everywhere.

Do you want to overcome your Kratom addiction so that you can continue to benefit from its mood-enhancing effects? Javanica is the best choice for you in that case. We give you a similar calming effect to kratom but with a softer power.

Despite not having the X factor, Javanica still has plenty of psychoactive potencies and offers similar relaxation and psychoactive effects, albeit with a milder effect that makes it less addictive and more effective when used in small doses.

According to research, the leaves of Mitragyna Javanica contain 73 fungal endophytes—a number that might make you uncomfortable. However, the positive aspect of this research weighs the advantages of Javanica because 55 of those fungi endophytes have antimicrobial properties.

This quality makes Javanica potentially useful as an anti-infection agent in the future. Mitragyna Javanica's antimicrobial and anti-inflammatory properties are a shining example in the developing field of medicine.

Kratom and Mitragyna Javanica are very different botanicals with different chemistry, legal status, and more, even though they are occasionally used for similar purposes. The following are a few of the most noticeable variations:

Neither of these active alkaloids can be found in Mitragyna plants of the Javanica variety. Mitrajavine and 3-isoajmalicine are its main alkaloids instead. Some users claim that the effects of these alkaloids are comparable to those of kratom. However, little is known about 3-isoajmalcine and mitrajavine, which brings us to our following point.

Worldwide, a fair amount of clinical research has been done on kratom. A growing number of clinical studies are examining kratom's safety, efficacy, and potential therapeutic uses, even though U.S. research is lagging.

However, Mitragyna Javanica, which has received essentially no clinical attention to date, cannot be said to be comparable. As a result, little is known about Mitragyna Javanica and its security, potency, or legal uses.

As a result, the currently available information is almost entirely composed of user testimonials. One reason to be wary of Mitragyna Javanica is its relative obscurity, which also leads to one of its main attractions.

Legality in the U.S.

Kratom is widely accessible across most of the country, despite ongoing discussions about bans at the federal and international levels by the FDA. However, local bans have been enacted in several states. These states are:

But even though there hasn't been much research on it, this makes Mitragyna Javanica legal in a sense across the board in the U.S. That's not because it's thought to be safer; rather, it's just because very little is being said about it right now.

Simply put, Mitragyna Javanica is much less potent than kratom. It's practically impossible to measure the difference in potency because they have completely different alkaloid profiles. Furthermore, the two will never produce identical results, making any such effort useless. However, users seeking an experience like kratom's potency will discover that they require a significantly higher dose and will use up their supply more quickly.

This is quite a big one because there can be limited sources for Mitragyna Speciosa online. Hence, prices may not be competitive among kratom vendors, and you get a smaller strain selection.

Kratom users looking for a safe source for a great selection of Kratom products, Apotheca has what you need. Whether it's Apotheca Kratom Capsules, Apotheca Kratom Powder, or Apotheca Kratom Extracts/Concentrates, you can rest easy knowing that you're going to buy high-quality products at the best prices.

This is the only thing that truly separates Kratom from Mitragyna Javanica. Although neither is completely regulated at the federal level, several states have supported the internal efforts of the Kratom industry to establish unwavering quality standards. There are no such guidelines in place for Mitragyna Javanica. In this market, there is essentially no testing, quality standards, and transparency.

Mitragyna Javanica can be considered the best kratom substitute. Think of it as a milder, softer, and more palatable variation of kratom. People trying kratom for the first time may find it attractive to buy Mitragyna Javanica as a less potent and robust Kratom alternative.

They can begin with Kra Thum Na and switch to kratom for stronger effects once they've gotten used to it. Keep in mind that the decision is arbitrary and dependent on various factors. So act quickly and enjoy the herb of your choice to revitalize your spirit and reap the incredible rewards that kratom makes.

Is Mitragyna Javanica as good as kratom?

Is Javanica a threat to kratom?

Try Mitragyna Javanica if you want a milder substitute for kratom. However, it might be the best choice in areas where kratom is not easily accessible. This herb has long been a favorite in Thailand, but it is only recently becoming widely accessible in the West. The potential of M. Javanica is unknown because the herb hasn't been thoroughly investigated. But right now, it appears promising.

How does kratom work?

Recent studies have shown that users of kratom report pain relief, improved mood, and reduced anxiety. Some opioid users claim that kratom assisted them in quitting by lessening their withdrawal symptoms and cravings.

How does Mitragyna Javanica work?

Mitragyna Javanica is frequently contrasted with kratom due to its reputation as a replacement for that herb. Like kratom, it can have stimulant and sedative effects in varying doses. The subtle differences are what set them apart. Javanica has stronger effects in some areas but fewer general advantages than kratom (like boosting energy, reducing pain, promoting sleep, or calming your nerves).

If you're in the North Carolina, Tennessee, and Georgia areas, Apotheca can give you the Kratom products you need. Whether you're looking for full-spectrum CBD oils, broad-spectrum CBD oils, or isolate CBD, we have them available. The store's mission is to provide clean, affordable, and sustainable alternative remedies to modern medicine.

Our team at Apotheca researches, curates, and tests partner brands that put people first before profit. No product reaches Apotheca's store shelves without being tested thoroughly for quality and efficacy.