Indica Strains and Their Effects 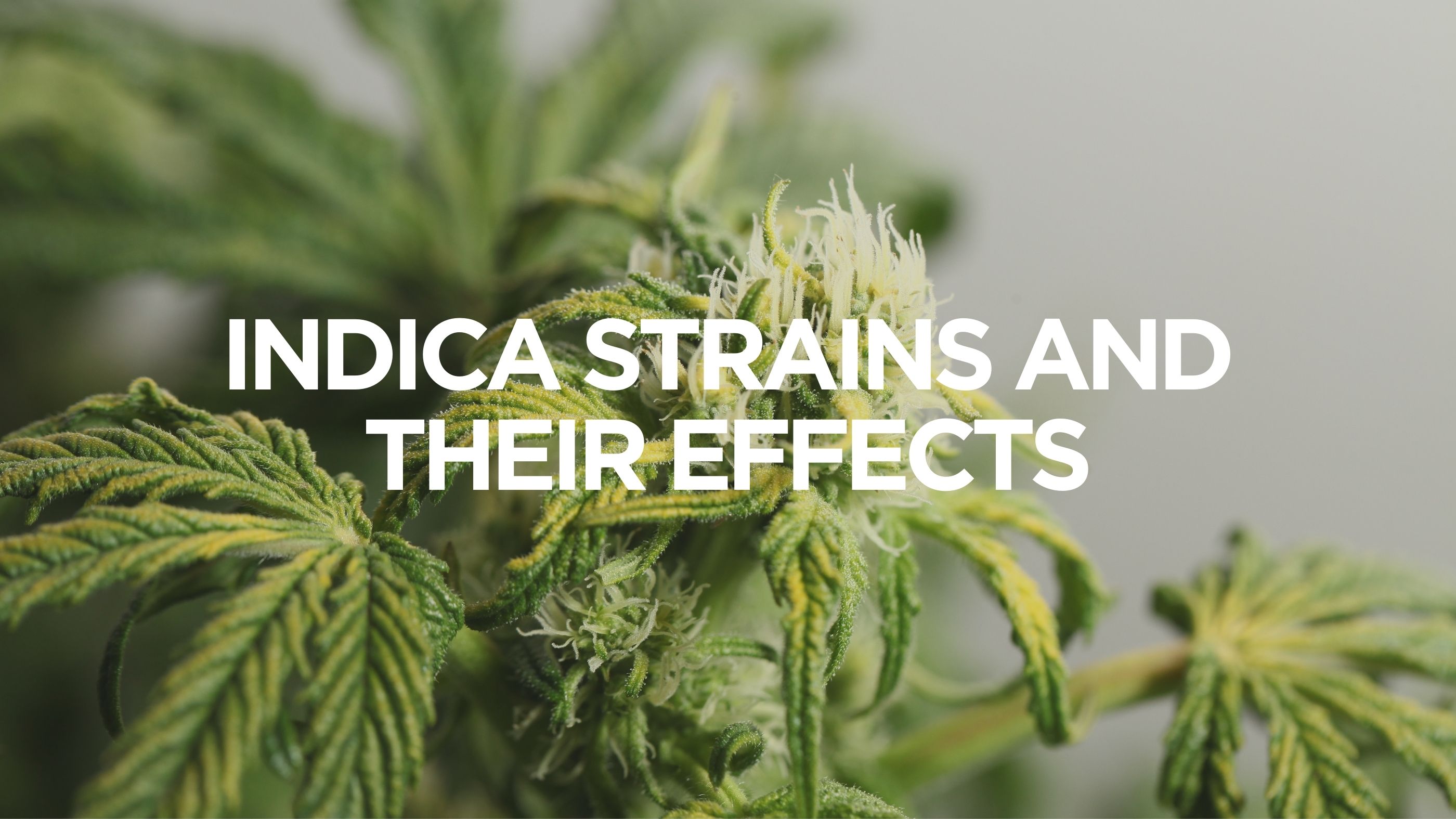 When shopping for marijuana products online or at dispensaries, you will see hundreds of strains with catchy names such as Green Crack and Girl Scout Cookies. If you're a novice regarding marijuana, it can get overwhelming to take in what these are. To start things off, you will notice that most products have three main classifications, one of which is the Indica strain.

Before we delve into the different types of Indica strains you can explore in the market, it's essential to know what Indica is and its difference from the other primary strains, Sativa or a hybrid of the two.

What is Indica Cannabis?

Indica is a category of cannabis strains and products with relaxing and sedating effects. In plant appearance, Indica cannabis plants have broad leaves, shorter stature, and quicker growth cycles. Due to their faster flowering times, Indica strains are better suited to cooler climates.

The plant species was first identified in 1785 by the French naturalist and biologist Jean-Baptiste Lamarck. He published a description of it, using the plant specimens found in India as the basis. Lamarck said the plant could be distinguished by its bushy appearance and short and firm stature.

If you come across a purple-colored cannabis, it's likely an Indica strain. Exposure to colder temperatures can transform cannabis buds or flowers into shades of purple. Indica plants have a sturdy build and quick growing time, which makes them ideal for beginner growers and those who prefer to cultivate their cannabis indoors.

Flavor profiles of Indica strains range from sweet musk and rich earth to dark fruit, like grape and berry.

A discussion about Indica will not be complete without comparing it to Sativa. The two main cannabis categories differ in appearance, growth traits, chemical compounds, and effects.

Indica plants are usually shorter, with thick stems and broad, deep green leaves. They also mature much faster than Sativas- and flower 35 to 65 times as well as have shorter seasons- growing sufficiently well in colder climates. Indicas will have denser and more compact buds compared to Sativa.

Indica strains usually smell earthy, musty, and even skunky in terms of scent. Sativas, on the other hand, typically have a sweet, spicy, or fruity aroma. Terpenes are the culprit behind the differences in smell between the two.

Terpenes are molecules that are like cousins to cannabinoids, such as THC and CBD. These chemicals are sometimes responsible for the pungent odors that the strains have, but their most significant benefit is medicinal efficacy.

Meanwhile, Sativa plants fare better in warmer climates and have longer cultivating seasons with more extended flowering cycles. These plants are taller and have narrow, light green leaves. Regarding traditional taxonomy, there is a big difference between Indica and Sativa. Also, Indica plants tend to produce CBD moreso than THC.

Are you looking for something that has lower THC levels? Check out our Apotheca Indoor Hemp Flower selection.

What Are the Effects of Indica?

Indica strains are known for that physically relaxing feeling, a "body stone". This is why Indica strains are taken by those who have anxiety problems and trouble sleeping. Because of these Indica effects, the strain is best taken when chilling out on the couch during the evenings.

The significant difference between Indica and Sativa is the latter is known for the energetic "head high"; this makes Sativa better suited for those who want to enhance their physical or creative activities, especially during the daytime.

And then there are a wealth of hybrids, which are strains that resulted from a cross between Indica and Sativa. Hybrids combine some of the properties of the two.

What Are the Benefits of Taking Indica Strains?

Cannabis Indica plants are easier to grow and tend to produce flowers earlier compared to Sativas. Indicas are resilient as well. And since it develops short, it's the ideal variety to grow indoors. But what growers love best about Indicas is its ability to produce higher yields.

As for its effects, Indica cannabis is known for giving users that happy, sedated feeling and blissful relaxation that everyone craves. It can also make some users feel hungry too. Indica produces a high that is best described as "deep body stone", which functions like a painkiller and will loosen tight and tense muscles. Many people like to do yoga while high for this reason.

Indica also has a higher CBD content than Sativa, making it more suitable for medical marijuana use. Patients with fibromyalgia, multiple sclerosis, and lupus benefit the most from this.

Due to its relaxing effects, users tend to go for Indica strains after engaging in strenuous activities such as cross-training, hiking, rock climbing, and more. It helps achieve better recovery. Others use Indica for increased relaxation like binge-watching TV shows.

What Determines Indica or Sativa?

We have already mentioned above that terpenes are sometimes the reason behind the intense aromas coming off of many cannabis strains. These are the absence or presence of a specific cannabinoid, or a certain volume of a cannabinoid. Terpene determines a strain's status, whether it's an Indica, Sativa, or a hybrid, although other factors also determine this.

The most common terpene in cannabis is called myrcene. It's known to help relieve symptoms of anxiety and insomnia. If the myrcene levels in a specific strain are more significant than 0.5 percent in volume, then that strain is considered an Indica. Now, if the myrcene level is less than one and a half percent, the strain is regarded as a Sativa.

Is Indica Better Than Sativa?

One is not necessarily better than the other- the best option for you would depend on the effect you want to experience and the physical and mental condition that you currently have. Are you having trouble sleeping, suffering from anxiety, and dealing with chronic pain? Do you want to relax and forget your problems after a long, hard day? Then Indica is the better option for you.

But if you want to feel more energetic and looking to enhance your creativity and productivity, then Sativa is what you should take. Sativas are known for their "mind high" results, unlike Indica's "body stone" effect.

Regarding availability, both can be found easily on the market, although Indicas may dominate since their plants grow and flower faster, producing more yield. Sativas take longer to grow and flower.

Fancy a cannabis product without the intoxicating highs? Check out our Apotheca Outdoor Hemp Flower selection.

The Best Indica Strains in the Market You Should Try Today

If you put relaxing and de-stressing above everything else nowadays, why not explore different Indica strains and experience the calming effects yourself; this will undoubtedly make you feel better if you are coping with insomnia and anxiety.

While Indica strains are an excellent counterbalance to Sativa strains, some claim that the terms "Indica" and "Sativa" may be outdated since there are only a few differences between the two. Here are some of the most popular Indica strains in the market at the moment:

This popular Indica strain is a hybrid of Thai and Afghani plants. Its exact origin is still disputed, although there are claims that it came from the Netherlands in the 1980s; others say that it came from Seattle, Washington.

The sweet and spicy Northern Lights is known for its resinous buds chock-full of therapeutic terpenes and cannabinoids. Users of Northern Lights swear by its euphoric and relaxing effects, which you will feel from mind to muscles.

The strain is also called Triangle Mints #23 and Pink Cookies (if you're from Canada). The first nickname was derived from the strain being a cross between Animal Mints and Triangle Kush. Wedding Cake has a sweet but peppery kick. Since it's super rich in THC, it's perfect for those suffering from sleeplessness, nausea, and appetite loss.

Strawberry Banana is high in THC, which makes it a good strain for those who want to catch up on rest. Also nicknamed Strawnana, this strain is Indica dominant, a cross between Strawberry Banana Gum and Banana Kush. The strain produces the "couchlock effect", in which you want to be glued to the sofa after taking a hit. It's best if you don't have to do anything or go anywhere after consuming Strawberry Banana.

Hindu Kush is an excellent option for those looking for a pure (landrace) Indica strain. It originally came from the mountainous region between Afghanistan and Pakistan and is commonly used in hash products.

The strain emits a sweet and earthy aroma, just like sandalwood, known to be perfect for easing stress and promoting sleep. Hindu Kush has a 19 percent THC content and loads of myrcene, which means that you are set for a couchlock effect after taking modest amounts.

GSC is a cross between Durban Poison and the potent OG Kush. Also referred to as GSC, this strain tastes like a batch of freshly baked treats straight out of the oven. Since this is Indica-dominant, it's great for chronic pain and stress relief. GSC has a starburst of flavors, from cookie dough to lemon and mint.

Since one of GSC's parents is Durban Poison, a Sativa, you may come across a GSC strain with more energizing and uplifting effects. In fact, GSC is sometimes labeled as a Sativa rather than an Indica. Remember that this rich strain contains 19 percent THC content- so if you're a beginner, you may want to try something else first.

Grandaddy Purple, or GDP, is a strain that smells like a California wine country. It's a cross between Afghanistan, Skunk, and Mendo Purps. Sleepiness is said to be GDP's primary effect, followed by relaxation and muscle spasm relief. The strain has no cannabidiol (CBD) in its cannabinoid profile, which makes it ideal for experienced consumers who are comfortable with THC.

This Indica hybrid's chemical composition is interesting, which includes the minor cannabinoid cannabigerol (CBG) and the terpene caryophyllene. It packs a walloping 20 percent THC, which means there's a deep relaxation time for its user. But it has CBG though, which makes it a little less of a "couch-lock" than the typical Indica.

With a title like that, it's not surprising that this strain can help you decompress, just like the comfort food the name is derived from. It's a cross between Mac and Alien Cheese and has high THC levels- 23 percent. With Mac and Cheese, expect a total couchlock effect and possibly intense euphoria after taking the hit.

Buy only the Best Indica Products At Apotheca

If you're in the North Carolina, Tennessee, and Georgia areas, Apotheca can give you the Indica products you need. Its mission is to provide alternative remedies to modern medicine that are clean, affordable, and sustainable for people and plants.

Apotheca's team researches, tests, and curates partner brands that put people first before profit through intent and action. No product reaches their store shelves without being thoroughly tested for quality and efficacy.

Visit the Apotheca Store Locations to see what's in store for you.