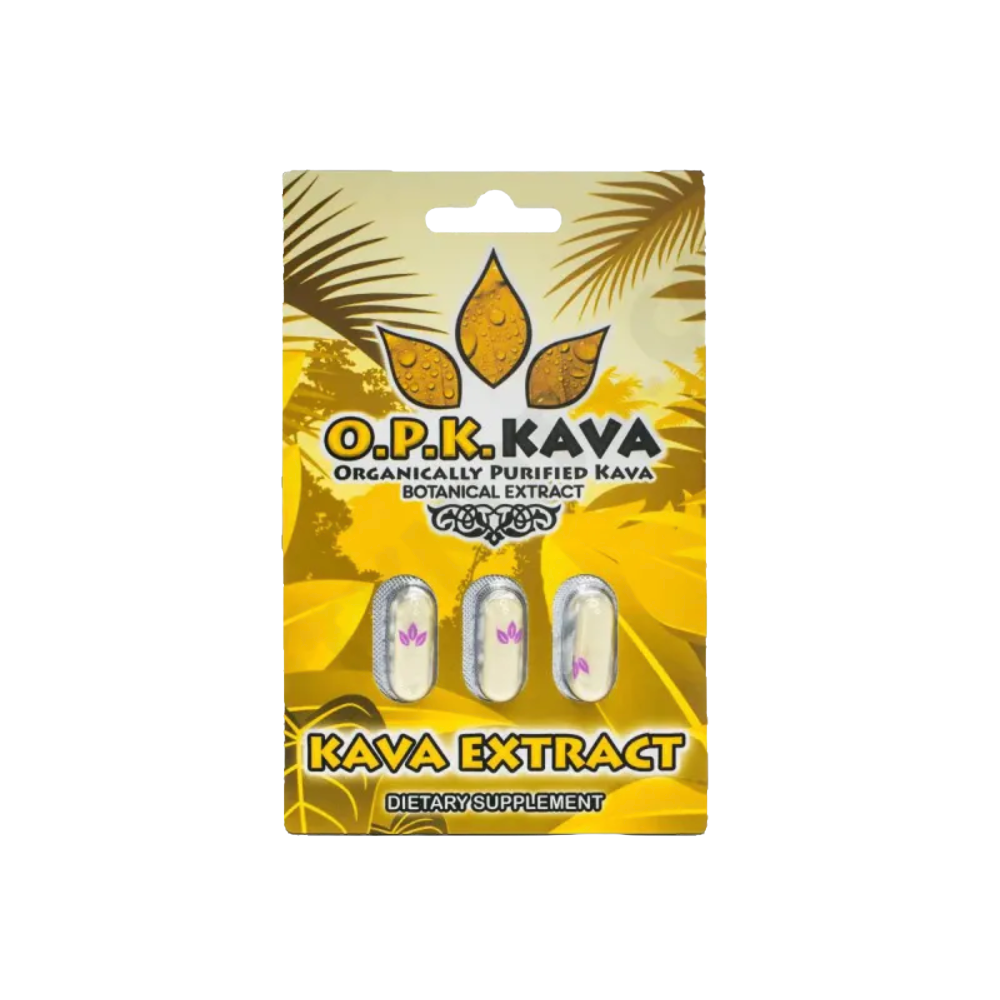 Attention - Due to industry low pricing, OPMS products are not eligible for discounts, coupons, or promos of any kind.

Availability: Out of stock
Only %1 left
SKU
1459
Add to Wish List Add to Compare
Details

OPMS OPK Kava is manufactured from the same company that makes OPMS Gold! That means you are getting the HIGHEST quality, purest and most effective herbal product on the market today. These gelatin capsules contain organically purified kava (OPK). This product can offer a more restful night’s sleep, and may help reduce stress and anxiety.

O.P.K. Kava is a high-quality, clean extract made from the lateral roots of the plant. Kava (Piper Methysticum) is native to the South Pacific islands and is a member of the capsicum (pepper) family. Kava has been used as a ceremonial beverage in the South Pacific for centuries.

How Kava Kava has been used

Kava and Kratom are often sold side-by-side at kava bars and in smoke shops and online dispensaries. Kava Kava and kratom may be similar in name and in drink appearance, but they are very different and should not be confused.

Kratom is a tropical, evergreen tree in the coffee family, botanical name Mitragyna speciosa. The plant is native to Southeast Asia, (Thailand, Malaysia, Indonesia, Borneo, etc.). Kratom has been a part of traditional culture for thousands of years. In Southeast Asia, it is traditionally chewed, in raw leaf form, to stave off exhaustion, relieve pain and as a mood enhancer.

Kava is a plant of the pepper family, botanical name Piper Methysticum, indigenous to the Western Pacific (Vanuatu, Fiji, Papau New Guinea, Micronesia, and Hawaii). In these Pacific island communities, Kava is consumed before the beginning of an important religious ritual or ceremony. Most commonly though it is used as a beverage to relax and unwind from the day. Often served at Nakamals (Kava Bars), it is drunk socially instead of alcohol.

Only for use as a botanical specimen. Mitragyna speciosa and Piper Methysticum are unapproved dietary ingredients. The manufacturers/re-sellers of these products, therefore, cannot advise on their uses. Ingesting Mitragyna speciosa can be dangerous. Consult your physician about potential interactions, other possible complications and precautionary measures before considering this product. By opening the package, you accept full responsibility for the use of the product, including but not limited to any adverse events or health complications. Inform your physician of the content labeled on the package. All products have been sterilized; all potential contaminants are removed for safety purposes. Manufacturers / Re-sellers assume no responsibility for the use or misuse of these products.

Keep out of reach of children. DO NOT USE IF YOU ARE PREGNANT, PLAN TO BECOME PREGNANT, OR WHILE BREASTFEEDING. NOT FOR SALE TO MINORS! 18+ ONLY. (21+ IN TENNESSEE).

Manufacturers / Re-sellers assume no responsibility for the use or misuse of this product.

**These statements have not been evaluated by the Food and Drug Administration. This product is not intended to diagnose, treat, cure or prevent any disease.**

Attention - Due to industry low pricing, OPMS products are not eligible for discounts, coupons, or promos of any kind.